A new trend in smartphones has emerged as of late, and that is offering them in a wide array of colors like the Moto X, or even the new iPhone 5C. That isn’t all either. Both the iPhone 5S and Galaxy S4 come in a gold color option, but HTC has a real gold smartphone with their newly announced 18K Gold HTC One.

Today HTC UK announced the brand new HTC One 18K Gold Limited Edition smartphone, but sadly you won’t be able to get one. Along with the exciting news of a pure 18K shell is a huge price tag, followed by the fact that they will only be producing 5 of these for the 18th annual MOBO awards in the UK.

The annual UK MOBO Award is for Music of Black Origin, and only 5 lucky winners will receive this shiny (and heavy) 18K smartphone. One that we’re hearing costs roughly $4,400 US. And now we understand why HTC chose to only create 5 of these one of a kind devices. The company went as far as to say this is the most expensive product they’ve ever built. 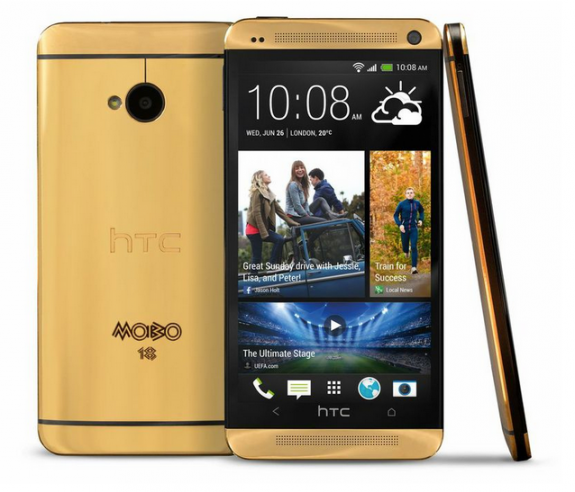 The limited edition smartphone was made in partnership with GoldGenie, who is no stranger to offering completely customized Gold smartphones in the past. They’ve actually been offering a Gold HTC One for a few months already. Not to mention a few iPhone’s in the past too. It’s worth noting that even though this is pure Gold and only 5 were built, there’s still a chance of a Gold colored HTC One for the masses, at a regular price, but so far we’ve only seen a few leaks to confirm that.

As far as the specs of the handset go, they are exactly the same as the regular HTC One. Meaning you’ll enjoy the same 4.7-inch 1080p HD display and quad-core processor. The only difference with this vs the retail unit is the aluminum unibody frame has been coated with 18K gold. The smartphone has MOBO etched in the back to celebrate the award, and you can vote for this years winners right here.