The HTC One doesn’t feature a menu button, but a new hack turns the HTC logo on the phone into a menu button.

Unfortunately the HTC One tweak doesn’t come easily for the average user. However users who are comfortable flashing files to the HTC One can turn the HTC One logo into a menu button as shown in the video below.

This HTC One hack works on the HTC One running 1.28 and 1.29 based roms, except the 1.29.401.12 rom. On this the 401.12 rom this tweak will cause the camera to stop working. To check your system version open Settings -> About -> Software information and look at the software number. 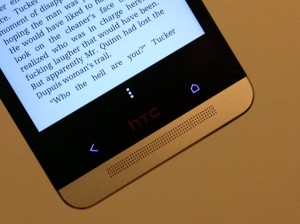 Get rid of the on screen menu with this HTC One menu button hack.

Over at xda-developers the creator tbalden provides three files for users to download which control the behavior and a modules download to make everything work. Tbalden offers more details and is providing support for his HTC One tweak in the forum thread.

Users can pick between using the logo as a menu button or as a sleep button and flash back to a version without the tweaks if things don’t work out right.

The HTC One logo is not actually a button, and based on the creator’s comments the hack basically uses the area of the screen right above the logo to act as a touch sensor.

It is disappointing that HTC shipped the HTC One without a menu button option, especially after adding one to the HTC One smartphones of 2012. At the HTC One announcement there was an option to make a long press of the back arrow a menu button, but that is not available on the international or the AT&T HTC One. A different hack adds this function back, but users report mixed success.

It’s possible that HTC will add the option to use the back button as a Menu button in a future HTC One update.