According to the leaked photos we’ve seen thus far, the new HTC One M9 will look extremely similar to the model released last year, but will feature some major improvements that will make it a worthy upgrade for buyers. Especially those coming from the original released in 2013.

Read: 5 Reasons to Wait for the HTC One M9

In 2013 the first and original HTC One arrived focusing on a clean design and better construction, introduced dual front facing speakers, and was the first truly impressive HTC phone in years aimed at taking on the competition. The phone wasn’t as successful as the HTC One M8 last year, but for the millions of owners a new option is coming soon. Read on to see how they compare.

Over the past few months and especially the past few weeks, the new HTC One M9 details have all started to take shape. We have a good idea of what to expect, leaked images are showing us how it will look, and the phone is shaping up to be a worthy successor to the previous releases.

We’ve already seen leaks of the specs as well as some potential confirmations of those, the first images surfaced earlier this week, and Bloomberg has already heard a few small details about the device and are sharing them with the public. Below is everything we know so far based on rumors, and how they compare to the original.

HTC’s first “One” smartphone arrived in February of 2013 with a nice 4.7-inch HD display and some compelling features. The screen was similar to the competition, and the front speakers made it an awesome stand-out buy. However, those wanting something a little better and bigger will want to see the new One M9.

HTC has always offered some of the best and most stunning displays on their devices, and that will likely hold true with the new One M9 when it arrives. They have great colors, and put in extra effort to have great viewing angles, crisp text, and an easy to view display even while outdoors. 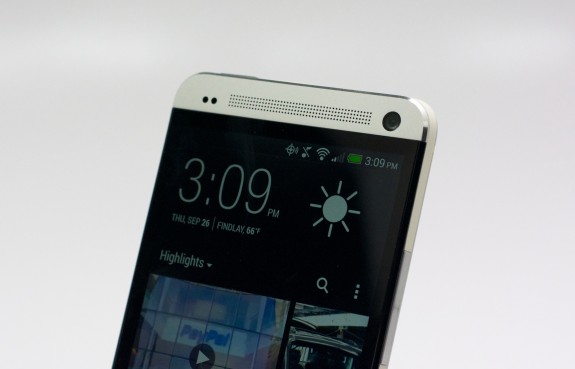 The HTC One M8 last year had a 5-inch 1080p HD display, one which was much better than the original, and we’re hearing the new HTC One M9 will be the same or even bigger. Reports suggest the same 5-inch display, or possibly a large 5.5-inch 2560 x 1440 Quad-HD screen. That might be too big of a jump for those with the original, so we’ll keep an eye on rumors and report back once we know for sure what will be offered.

All said and done, the screen will be bigger and of a higher resolution than the original. This is something many buyers will like if they’ve stuck it out with the first HTC One, so be on the lookout once it’s released.

When the HTC One was announced and released in 2013 it had some of the best specs and features of any device. And while specs aren’t everything, buyers like to know what’s available and if the newest device is worth the upgrade. With the phone being two years old the new One M9 is certainly a worthy successor, and has tons of horsepower to run the latest games, apps, and Android 5.0 Lollipop release. Here’s the raw numbers for those interested.

As you can see from the raw numbers outlined below, the new HTC One M9 will be a major increase across the board and something all original HTC One owners can get behind. The screen is bigger, the camera is much better reportedly being a 20 megapixel shooter, the front camera will be better than the originals back camera, and it has more than double the power with an 8-core processor.

Again numbers aren’t everything, but with all this under the hood and the latest Android 5.0 Lollipop the HTC One M9 could be a great phone, and one worth upgrading to if you’re still holding onto the original HTC One. Just know it will be fast, smooth, stable, and run the latest and greatest apps and games.

The new HTC One M9 will focus heavily on photography, and that’s on both the front and the back. Last year the HTC One M8 had two cameras around back, but they weren’t that great. Going back to the original HTC One with a single 4 Ultrapixel camera, and you’ll know the camera experience will be better. This has been our (and readers) biggest complaint of the HTC One, so if that’s a problem for you, know that the new HTC One M9 will be leaps and bounds better.

This year though, HTC has reportedly introduced a new 20 megapixel rear camera with a dual-LED flash, and moved that 4 Ultrapixel camera to the front for selfies. That along with all the HTC Eye software they released this year, means a great camera experience. This new phone should take excellent photos from both the front and the back. The leaked image above shows the redesigned back of the phone to support the new bigger camera.

In terms of software, the HTC One is far behind that of the recent smartphones. While it runs Android 4.4 and should receive an update to the new Android 5.0 Lollipop eventually, it won’t get some of the best features. Those include the tap to wake feature, access to all the new camera technology, and anything else that HTC debuts with Sense UI 7.0 come this March.

It appears that the HTC One M9 will launch with Android 5.0 Lollipop, which was announced and released in October. It should be on the latest Android 5.0.1 or Android 5.0.2, but be skinned with a revamped and improved HTC Sense 7.0 user interface. The HTC One will see Android 5.0 eventually, but it probably won’t get an update to Sense 7.

We can expect updates to quickly arrive for the original HTC One M8, but we can’t confirm HTC’s plans for the original. HTC has been one of the best lately when it comes to updates, but being two years old there’s only so many new features they can add without needing the hardware of new devices.

This means that once the HTC One M9 is revealed, many of the selling points won’t be available for the original HTC One, which could be just one more reason to upgrade.

If you still have the original HTC One you’re probably counting down the days until the new HTC One M9 is released. The original has been available for two years, so that means most owners are eligible for an upgrade, or will be soon.

Sadly we don’t have an exact release date for the new HTC One M9, but with the announcement set for March 1st HTC could surprise everyone and release it the same day like last year, or release it within 2-3 weeks across all major carriers. That seems to be the best approach, one we’ve seen from Apple in the past.

Prospective buyers can look forward to a new HTC One M9 in three or so different color options being available from their carrier of choice, and once we have more details or confirmations we’ll be sure to update. There’s no doubt this will be a worthy update for those with the original HTC One, but you’ll have to decide yourself or check out something else like the Galaxy S6.