The original HTC One (M7) has reached its 2-year anniversary since being released, and that means that many owners are likely looking for a replacement. That could be the new HTC One M9 that was announced earlier this month and hits most carriers on April 10th. Now that everything is official, here we compare the new HTC One M9 with the original for those seeking an upgrade.

As we all know, all the leaks and rumors about the all-new HTC One M9 were rather accurate. It looks extremely similar to the HTC One M8 last year, and somewhat similar to the original as well, albeit with a bigger screen and tons of other improvements across the board. Many of which make it a worthy successor over the original, and even last years model.

In 2013 the first and original HTC One arrived focusing on a clean design and better construction, introduced dual front facing speakers, and was the first truly impressive HTC phone in years aimed at taking on the competition. The phone wasn’t an instant success, but won lots of awards for the design, and has inspired plenty of other great phones, not to mention pushed Samsung and others to use more premium materials on their Android devices. Read on to see what’s new, and if the new M9 is worth upgrading to.

HTC’s original One (M7) was announced in February of 2013 and hit multiple carrier shelves in March, making it two years old and getting old in the tooth. This also means that buyers who got it on contract are upgrade eligible, and a brand new HTC One M9 is hitting shelves in a few days worth considering. Here’s how they differ, and what you need to know.

Now that we know everything about the new HTC One M9, and know that the release date is set for April 10th from most carriers, buyers are likely weighing their options. On that note, the Galaxy S6 hits shelves this week too. It has a lot to offer as well, but doesn’t feature a micro-SD slot like the HTC One M9, something many owners enjoy and use. This, is one of many reasons it’s a great phone, and below is additional details.

HTC’s first “One” smartphone arrived in February of 2013 with a nice 4.7-inch HD display and some compelling features. The screen was similar to the competition, and the front speakers made it an awesome stand-out buy. However, those wanting something a little better and bigger will want to see the new One M9.

HTC has always offered some of the best and most stunning displays on their devices, and while the new HTC One M9 doesn’t have a huge Quad-HD display, it still comes in with a respectable 5-inch 1080p HD screen.  They have great colors, and put in extra effort to have great viewing angles, crisp text, and an easy to view display even while outdoors. It isn’t as big as the G3 or Note 4, but still bigger and will be a noticeable increase for those coming from the original.

Making the jump from the 4.7-inch HTC One (M7) to something like the Note 4 or Nexus 6 may be too big, so those looking for a small but noticeable increase, the 5-inch HTC One M9 may be the perfect smartphone here in 2015. That said, we’re also hearing an HTC One M9 Plus could come later this year with a 5.5-inch screen, for those who enjoy HTC’s style, but want an even bigger screen.

All said and done, the screen will be bigger and of a higher resolution than the original. This is something many buyers will like if they’ve stuck it out with the first HTC One. The Galaxy S6 though, has a 5.1-inch Quad-HD display, so that’s another possibility and something HTC will be fighting throughout 2015.

The design remains mostly unchanged. It was an award-winning phone, the HTC One M8 won even more awards, so HTC did the same thing this year. And while that’s great, it’s also disappointing as many wanted and were expecting something new and refreshing. It was a safe route, and one that may turn out to haunt them. That said, the new HTC One M9 has rounder edges and is easier to hold, a more matte finish that’s less slippery, easier to grip without fear of dropping, and isn’t a fingerprint magnet.

At the same time, they increased everything under the hood compared to last year, yet made the device even smaller. Meaning if you skipped on the One M8, the new HTC One M9 has much more to offer over your old One (M7) and isn’t much bigger physically, but has tons of improvements across the board.

They’ve improved the camera, and added a new two-tone finish to the all metal unibody frame. The silver and gold looks stunning, and fans of the original HTC One will love the new One M9.

The new HTC One M9 focuses heavily on photography, and that’s on both the front and the back. Last year the HTC One M8 had two cameras around back, but they weren’t that great. Going back to the original HTC One, we only had a single 4 Ultrapixel camera. This has been ours (and readers) biggest complaint of the HTC One lineup, so if that’s a problem for you, know that the new HTC One M9 is better, but certainly not the best around. See our review above for comments on the camera.

This year, HTC has introduced a new 20.7 megapixel rear camera with a dual-LED flash, and moved that 4 Ultrapixel camera to the front for selfies. That along with all the HTC Eye software they released this year, means a great camera experience. This new phone should take excellent photos if the conditions are right, and will certainly be an improvement over the original. That said, others from Samsung or LG could potentially be better if you find yourself never enjoying the photos from your HTC.

The camera on the HTC One (M7) and One M8 were one of the biggest complaints many owners had, and that has finally been addressed with the new HTC One M9. If you want a great camera experience, the One M9 somewhat delivers.

When the HTC One was announced and released in 2013 it had some of the best specs and features of any device. And while specs aren’t everything, buyers like to know what’s available and if the newest device is worth the upgrade. With the phone being two years old the new One M9 is certainly a worthy successor, and has tons of horsepower to run the latest games, apps, and Android 5.0 Lollipop release. Here’s the raw numbers for those interested.

As you can see from the raw numbers outlined above, the new HTC One M9 will be a major increase across the board and something all original HTC One owners can get behind. The screen is bigger, the camera is much better, the front camera will be better than the originals back camera, and it has more than double the power with an 8-core processor. It is actually a power efficient 2.0 GHz quad-core for heavy tasks, and a 1.2 GHz quad-core for lighter tasks to keep battery life in check.

Then, another complaint was battery life. The HTC One M9 has a huge 2,860 mAh battery, and features Qualcomm Quick Charge 2.0 technology. It will charge over 60% faster than the original HTC One, especially from 10-50%. Meaning you’ll rarely need to find a charger during a typical work day, and if you do, it will charge up extremely fast and have you ready to go in 15-30 minutes.

Again numbers aren’t everything, but with all this under the hood and the latest Android 5.0 Lollipop the HTC One M9 should be a great phone, and one worth upgrading to if you’re still holding onto the original HTC One. Just know it will be fast, smooth, stable, and run the latest and greatest apps and games. It’s a no-brainer upgrade for HTC fans.

While the HTC One (M7) runs Android 4.4 and should receive an update to the new Android 5.0 Lollipop eventually, it won’t get some of the best features. Those include the double tap to wake screen feature, access to all the new camera technology, and the new HTC Theme system shown off with Sense 7.0 that is on the new One M9.

The HTC One M9 is running Android 5.0.2 Lollipop, which was announced and released in October. The HTC One will see Android 5.0 eventually, and some Google Play Edition owners already have it, but it probably won’t get an update to Sense 7, and if it does, don’t expect all of the features to be compatible.

We can expect updates to quickly arrive for the original HTC One M8, but we can’t confirm HTC’s plans for the original. HTC has been one of the best lately when it comes to updates, but being two years old there’s only so many new features they can add without needing the hardware of new devices. Android 5.0 Lollipop will likely be the last major update to the HTC One (M7), so the One M9 is a great choice moving forward with a guarantee of at least 18 months of software updates. That, and the new theme engine on the One M9 is one of our favorite features. There’s no need to root your phone when you have that much control out of the box.

Last but certainly not least is the price. The HTC One is nearly two years old and likely not available from carriers these days, but you can probably find them new or used from other online sources for under $400. This makes it a great buy, but again, this is geared for those seeking to upgrade, not buying the phone. 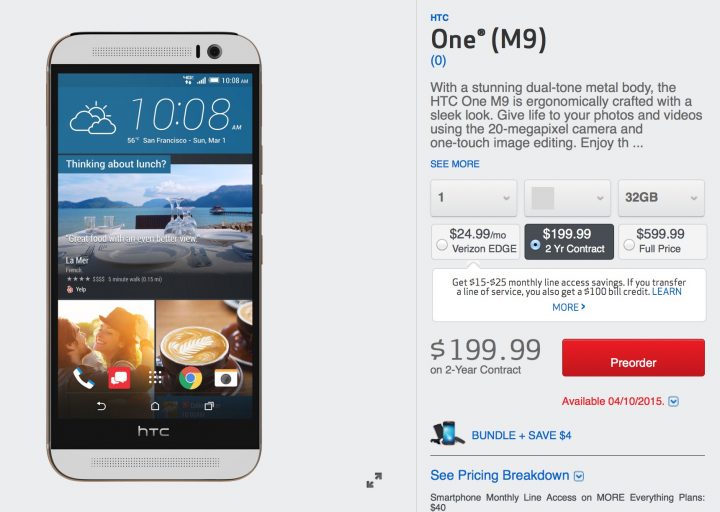 The new HTC One M9 release date is set for April 10th, and has already started to arrive for T-Mobile buyers, and will hit shelves in a few days. Most carriers are asking $199 with a new 2-year contract, monthly payment options around $25-27 per month, or $649 outright.

This is a big price to pay, but you’re getting the latest and greatest smartphone with some cutting edge new technology, a better camera, and much much more. All said and done the HTC One (M7) is still a good smartphone, but it’s now two years old, and many owners are likely in need of an upgrade. A great choice would be the new HTC One M9, or maybe the Galaxy S6 Edge.