According to documents leaked to TMoNews, users on the carrier an expect a T-Mobile HTC One release on April 24th.

This is the first we’ve heard that all T-Mobile stores won’t be getting the HTC One at the same time though, T-Mobile sent a release of this nature for the Samsung Galaxy S3 in its stores last year. These documents list a launch date of “April 24th” 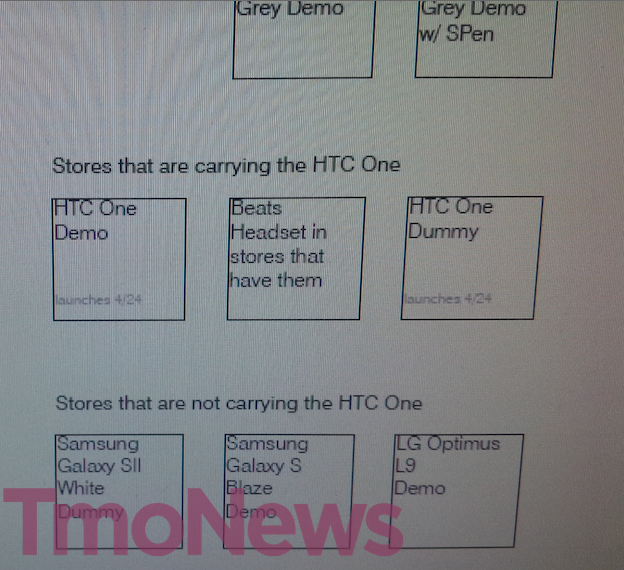 Leaked documents from T-Mobile pinning the HTC One Launch for April 24th.

The leaked planograms point to two different store configurations in addition to the device’s launch date. Planograms are retail documents that highlight exactly what products will be available at specific locations and their exact location in relationship to other products in the store.

Right now, T-Mobile’s public relations team is neither commenting on the leaked document nor confirming the date in the documents.

Read: HTC One Device Shortages Could End in May

A mid-to-late April launch of the HTC One on T-Mobile could give HTC the breathing room it needs to sell more devices.  T-Mobile confirmed that it would be releasing the Samsung’s upcoming flagship, the Samsung Galaxy S4 in early May during the device’s announcement window. The carrier is expected to begin taking preorders for the Galaxy S4 on April 16th.According to leaked documents from Staples, the tentative launch dates for the Galaxy S4 are April 26th for AT&T customers, May 1st for T-Mobile customers, and May 30th for those on Verizon.