HTC One Setup Guide: Top 10 Steps to Get Started

The HTC One is up and running out of the box in minutes, but smart users will want to change the HTC One settings to deliver a better experience.

In 10 minutes, this HTC One setup guide will show users how to improve the keyboard, secure the HTC One, get free storage and much more.

HTC ships Android 4.1 with HTC Sense 5 on the HTC One and there are several new things for users to customize and take advantage of, like HTC BlinkFeed. 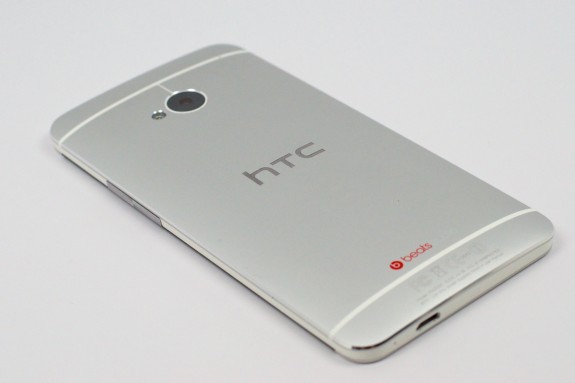 Here are ten essential HTC One setup tips and tricks for a better experience.

Our HTC One guide will also cover setting up device tracking in case the HTC One is lost or stolen and cover other new features in Android 4.1 Jelly Bean.

After changing these 10 HTC One settings, the HTC One will be running better, more secure and will automatically backup all your important data and settings.

Transfer Info from iPhone or Android

While it is possible to set up the HTC One as a new phone without importing old items, HTC makes it easy to import data from an old Android phone or from an iPhone. This allows users to quickly import their information, photos and more.

If you are upgrading from an Android phone running at least Android 2.3 (which is most phones) the HTC Transfer Tool will transfer bookmarks, calendar, messages, contacts, music, photos & videos and settings from the old phone to the HTC One. The video below shows the basics of this HTC One setup step.

iPhone users switching to the HTC One can also take their data with them thanks to the HTC Sync Manager. This free app installs on a Mac or PC and allows users to transfer info and media from their latest iTunes backup. To get started, download the HTC Sync Manager and make a current backup of the iPhone you want to import information from. Make sure the backup is not encrypted. The video below explains the process.

This will move iPhone contacts, messages and photos to the HTC One. It may not bring every piece of information so users may want to look for apps to sync other pieces of data like Notes and Voice memos. 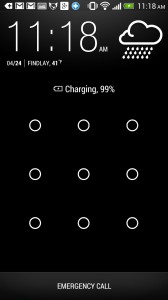 There are several options for securing the HTC One, but for simplicity and security we usually go with a PIN. To get started follow these steps.

From there pick the screen unlock method to use and complete the setup process by entering the PIN, password or pattern twice or completing the facial recognition.

When prompted decide if the phone should show message previews and missed calls on the lockscreen. The facial recognition is not as secure as other methods, but is better than nothing.

After setting up the HTC One password, tap on Lock phone after and pick a reasonable time. We generally leave the phone unlocked for 5 to 15 minutes so that it is not as much of a hassle when constantly checking the smartphone for updates. 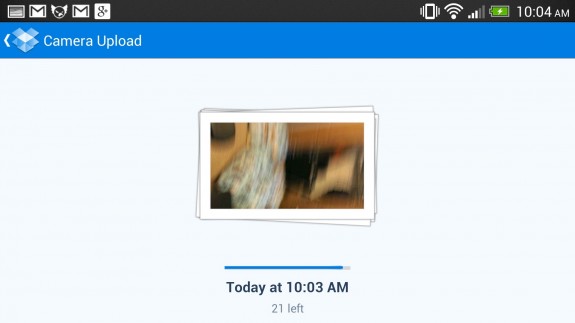 HTC One Setup – Use Dropbox to automatically backup photos and videos an get 50GB of free storage.

When prompted say yes to Camera Upload and the HTC One will automatically upload photos and videos to Dropbox, which will in turn download them to your computer and offer the ability to see them all online in the Dropbox app.

We recommend only allowing uploads over WiFi to save on mobile data charges. Users who are traveling may want to change this to use cellular data while on vacation in case the HTC One is lost or stolen. Keep in mind one HTC One Zoe includes 20 photos and a 3 second video, so the uploads can eat into mobile data quickly.

Setup Find My HTC One

The HTC One doesn’t ship with a built-in app to find a lost or stolen device like the iPhone does, but users can install a free app to track down their HTC One in a flash.

Lookout Security and Antivirus is a free app that lets users track down a lost or stolen HTC One and checks apps for Malware.

To get started, open Google Play and install Lookout Security and AntiVirus. Once the app is installed, open it and turn on Missing Device. Make sure you create an account so you can track the smartphone if something happens.

After it is set up, go to Lookout and verify that it can track the HTC One’s location. Users can also subscribe to a premium service to wipe and lock the HTC One when it is lost or stolen.

Use the HTC One as a Remote Control

The HTC One features an IR port hidden behind the home button that allows users to control an HDTV, cable box and home theater system with the device. Once it is set up, users gain access to a great looking channel guide and are able to control nearly any TV, stereo or cable box with the device.

To get started, tap on the app drawer and open the TV app. The app will guide users through the setup, linking the HTC One to a local channel guide and to devices in one room. Users can setup more devices by adding remotes for other parts of the house, a friend’s house or even the TV at a local bar. The video below shows an overview of this setup and app.

The Sense TV app will then let users tap on a TV show or movie and the HTC One will automatically change the channel so you can watch TV in a tap.

Calibrate the HTC One Keyboard

Out of the box the HTC One keyboard can prove problematic to type on for many users. This is especially true for users coming from another smartphone. Thankfully HTC includes an option to calibrate the keyboard. This step takes 30 seconds and can dramatically improve the typing experience. 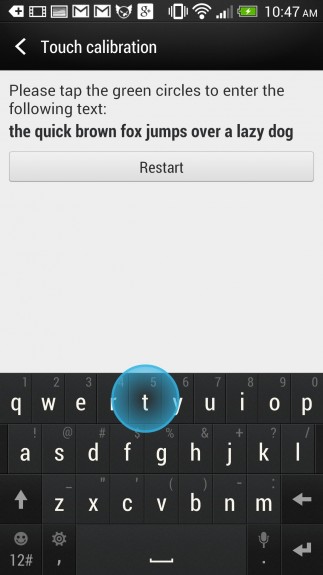 HTC One Setup – Calibrate the keyboard for a better typing experience.

Anytime the keyboard is visible tap and hold on the comma to open settings. Tap on Adanced and then on Calibration tool. Follow the steps to calibrate the keyboard and enjoy a better typing experience.

This menu also lets users turn on the Trace keyboard, which is similar to Swype.

For users who still need a better typing experience, check out SwiftKey or Swype, two of the best alternate keyboards on Android. 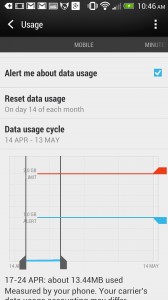 Most HTC One users will need to be aware of how much data they use in order to avoid account overages. Thankfully the HTC One ships with a built-in data monitor that can warn users when they reach a specific level and cut them off at another level. Additionally this feature will identify which apps are using the most data.

Open Settings -> More -> Usage -> Then move the sliders to set a warning and a data limit.

The HTC One is able to keep cellular and WiFi usage separate and will automatically change the usage cycle each month so there is no need to manually reset it.

Users can scroll down to see what apps are using the most data on the HTC One.

The HTC One ships with Android 4.1.2, which includes Google Now. Google Now is a service that combines information in your Google searches, Gmail and more into an assistant that knows what is important to you and when you need to leave to get to appointments, even with heavy traffic in the way. 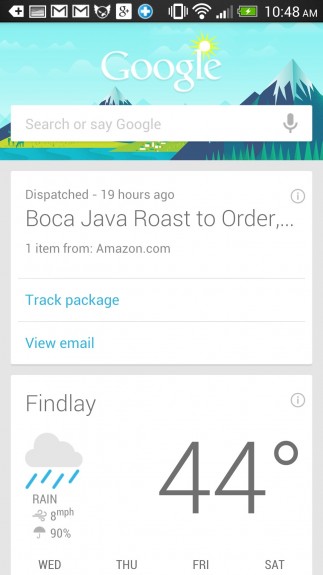 HTC One Setup – Turn on and fine tune Google Now.

To use Google Now on the HTC One, hold the home button for about a second. This will launch Google Now. Allow the service to connect to your main Google account.

From here the service will start showing notifications for weather, tracked packages and your favorite sports teams. Users can also say, “Google” to search Google from this screen.

Tap on Settings in Google Now to customize stocks, sports teams and locations for the service. The video below covers several other great Android 4.1 features and shows off Google Now.

Thankfully users can customize BlinkFeed to see the topics and updates they care about most. The initial setup will help users get started, but from there users can pull down slightly and tap on the three dots on the right side of the screen. This will open up the settings and allow users to pick which news sources, topics and social media accounts. 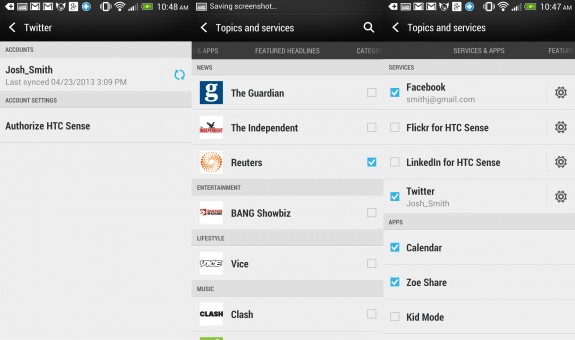 From here, users can make HTC BlinkFeed show content they want to see. With the right setup, HTC BlinkFeed is a great HTC One feature. 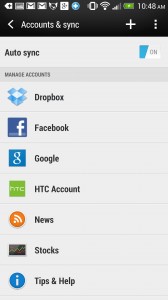 In order for HTC BlinkFeed and all the social sharing aspects of the HTC Sense 5 skin to work users will need to link their many accounts to the HTC One.

We recommend linking a Google account to the HTC One so that it can sync email and calendars as well as personal information to apps like Chrome and so it can automatically log users in to other Google apps.

To get started, tap on Settings -> Accounts & sync and then tap the + icon in the upper right to add an account. Enter the user information as needed and save the account. Users can enter multiple Google accounts  as well as Flickr, Exchange email accounts, Hotmail, Evernote and more.

For more, check out our HTC One review.