The HTC One is an attractive looking smartphone, but there’s also a collection of cool software features on the HTC One that combine with the all metal body to deliver a better all-around experience.

Unlike Samsung, which made a big deal about the Samsung Galaxy S4 software during the launch event, HTC played things more low-key. This may change thanks to a bold new marketing plan for the HTC One, and judging from these new HTC One software features the company should be bragging.

These aren’t exactly hidden HTC One features, but we’re betting the average user would need a few weeks to find all of them when they get their HTC One. 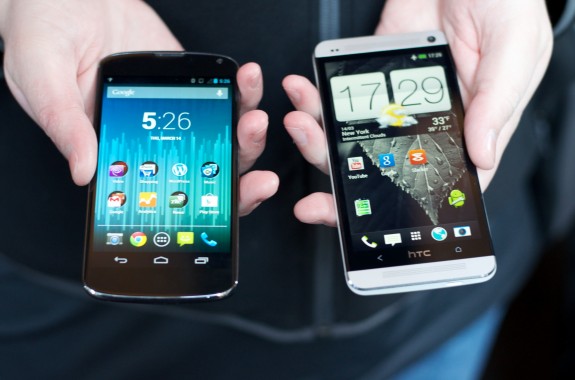 The HTC One software features help set it apart from devices like the Nexus 4.

We Already shared our HTC One hands-on video, and this new collection of HTC One demo videos serves as a sort of HTC One software hands on video. While they come directly from HTC and the results are obviously from the hands of seasoned professionals, this is still a great way to get a look at the HTC One Software features.

Now that the HTC One release date is set in stone for AT&T and for the Sprint HTC One, we know when smartphone will hit the U.S. Until the HTC One arrives, here is a closer look at what the HTC One can do. There is talk of a Verizon HTC One in the near future as well.

HTC One and HTC Blinkfeed, users get to see their topics and social networks on the HTC One home screen. The HTC Blinkfeed software feature come first on the HTC One, and is rumored to arrive with HTC Sense 5.0 updates on other devices. Blinkfeed replaces the main Android home screen to deliver content from a variety of partners.

HTC Zoe is a way of capturing a series of photos and a three-second video to compile a collection which is easy to share. HTC calls this a living photo, and allows users to share these with HTC Share. We previously took a look at the online interface and some of the best HTC Zoes to see what this feature is capable of.

The HTC One includes an IR port that allows users to control their HDTV or home theater with their phone. The IR port is hidden in the power button, so keep that in mind when looking for cases. Users can pick their HDTV, DVR and more and then can look through listings in a sharp-looking TV guide.

With HTC One Video Highlights, the HTC One can create a short movie from the photos and videos you take at an event. This HTC One software feature instantly creates the video from your content and helps users share it with friends. A compiled short overview of a party or event without the work of editing.

The HTC One features a Sequence Shot software feature that allows users to take a series of photos and then meld them together into a single photo. This allows the HTC One to actually show motion by showing five frames on-screen at once. Not everyone will be taking photos of parkour, but this is a cool feature.

The HTC Group Shot feature lets users take a group photo then dial in the smile. Simply take a photo of a group and then use the Always Smile app lets you find the smile on a person as the camera is capturing frames during the full-time you take the group shot.

Someone walking into the photo can ruin a perfect shot, but with the HTC One Object Removal tool, its easy to erase photo bombs and unwanted objects from your photos.

With the HTC One it’s possible to slow down the video captured to deliver drama or humor. Thankfully users don’t need to show the full video in slow motion. Users can select a segment to play in slow motion, as shown in the video above.

With HTC Transfer HTC makes it easy to move from an old Android phone, running Android 2.1 or higher, to the device. The process of moving to a new android phone isn’t tough, but this should simplify things.

Switch from iPhone to HTC One

HTC is hoping the One lures in former iPhone owners, and offers a tool to make the switch from iPhone to HTC easier. This can’t bring the iPhone apps over obviously, but it should bring over a lot of the user’s personal information to make the transition easier.