With the HTC M8 flagship smartphone coming soon, HTC is looking to get a few more sales out of last year’s popular smartphone by stealing some customization ideas from Motorola.

Lately a big trend with manufacturers is to offer customization or at least a few different color options. Motorola is leading the pack with more than 18 different colors for the Moto X, phones made out of wood, and more, and even Google recently joined the trend with a Red Nexus 5. However, today HTC wants to offer something similar by stealing a key idea from Motorola, that being customization by way of custom-colored cases for the HTC One. 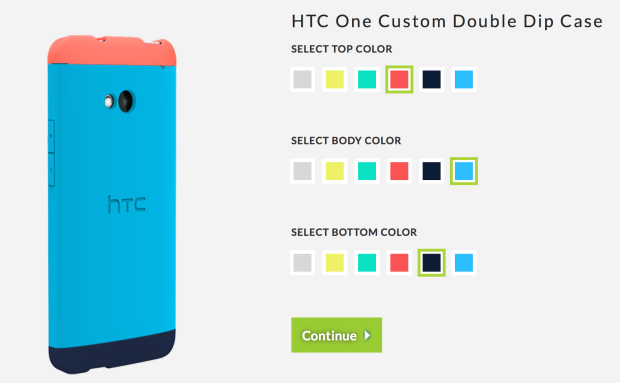 HTC originally launched the One smartphone with a few accessories, including a double-dipped case offering two different colors. This week though, HTC took that a step further and is now offering a slew of customization features for the same double-dipped cases.

Following a similar idea and design as Motorola’s MotoMaker website, users can head to HTC’s online page to customize and select a color of their choosing, as shown in the image above. Then get a fancy and colorful case for $29.99.

The new website will allow buyers to head in and choose from six different colors in three different areas. Offering custom colors on the top, middle, and bottom for their HTC One protection. These days there’s a lot of arguing over the build materials and look of smartphones, just ask Samsung and all the complaints over the plastic design, but in the end most users toss a case on it anyways.

HTC wants to capitalize on the recent customization craze by at least allowing a few different options for potential customers. We could see something similar also arrive for the new HTC M8, which is rumored to be released sometime next month as the successor to the original HTC One.