With Verizon Wireless offering two superb camera phones, choosing which device to buy within the carrier’s lineup could be quite the challenge given that the HTC One and Nokia Lumia Icon deliver outstanding low light photography. In fact, despite their different ecosystems and operating systems, both the Lumia Icon and the HTC One share a lot in common–machined aluminum and polycarbonate unibody designs, a compact frame with roomy display, fast processors and excellent specs, and an interface that allows you to get to your most needed information quickly and efficiently. So which device do you choose? Let’s explore some of the key features that make each phone stand out so you can make an informed decision.

Machined out of aluminum and polycarbonate, both smartphones exude a stylish, yet understated design that exudes quality and sophistication. 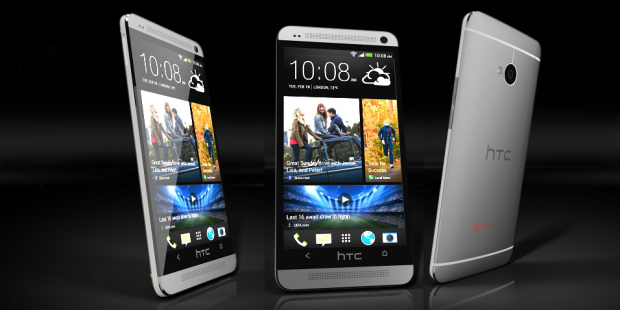 HTC One. HTC’s zero-gap manufacturing process where it injects plastic seams into the HTC One’s aluminum build had earned the company many accolades, and rightly so as many of HTC’s rivals are still grappling with chintzy plastic construction of their phones. For discerning fashion-seeking Android users, the One represents the one alternative to Apple’s iconic iPhone construction. Unfortunately, though, despite a focus on design, HTC wasn’t able to grow market share with the HTC One as it had hoped. 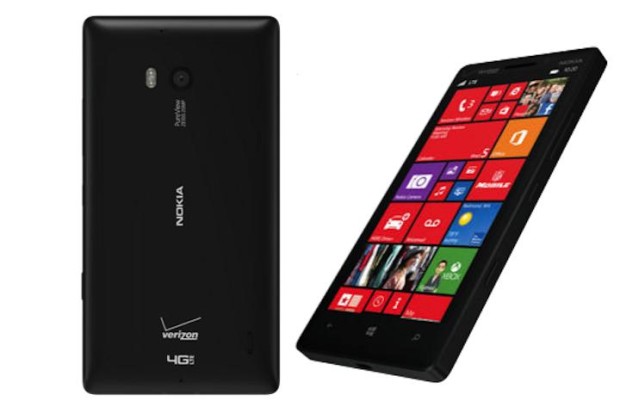 Lumia Icon. Both Nokia and Verizon are hoping that the Icon’s straight edges will make it both contemporary and iconic. Taking a differing design language than traditional Windows Phone Lumia handsets found on rival carriers, the Icon is both bold and understated, taking a more boxy appearance while being more subdued than the colorful hues we’re more attuned to see from Nokia handsets. The Icon uses a straight metal band, curved plastic backing, and a curved front glass that makes it look like a flattened, rectangular hamburger from the side. Build quality is still impressive and the Icon feels more premium than Nokia’s other colorful phones, and the curved front Gorilla Glass 3 panel makes the phone a pleasure to touch and swipe.

Verdict. HTC edges Nokia out in th design department with its chamfered edges, stereo front-facing BoomSound speakers for rich Beats Audio-inspired stereo sounds when watching movies, and a design that feels a bit more premium thanks to the use of slightly more metal components on the frame. Still, the Lumia Icon is no slouch and we love the curved glass.

Both handsets boast optical image stabilization, impressive low light shooting, and LED flash units to assist when it gets too dark. Still, despite their similarities, the camera experiences can’t be more different on these two handsets.

HTC One. HTC is going for the consumer market with the HTC One with a simple UI and intuitive camera menu loaded with filters for Instagram-like effects. The camera here is no slouch, and HTC’s optimized software delivers some cool tricks.

With a 4-megapixel Ultrapixel sensor, HTC isn’t diving into the megapixel race. Opting instead for fewer pixels, but with each pixel being larger, the HTC One is able to capture more light in each pixel. Coupled with a mechanical optical image stabilization mechanism, this means that the average consumer can take a photo, without even needing to turn on the flash, at a bar, club, restaurant, or other dark and moody place and still have a photo that’s brightly lit. Try this trick on an iPhone or other camera phone and likely you’ll get a lot of grain and noise in your resulting photos. Not so with the One thanks to its low light performance.

However, Ultrapixel isn’t perfect. What you gain in being able to see in the dark, you loose in seeing details in the day. Like night vision binoculars, the HTC One isn’t a master of all trades–during the day, you’ll see the One not being able to capture and retain as much details in images as competing 8-, 13-, 20-, or 41-megapixel sensors found on competing phones, like those from Apple, LG, Nokia, or Samsung.

HTC’s camera experience isn’t necessarily about capturing all the details of the memory, however. It’s about having fun doing so and remembering and recalling those memories in a retro, yet inspired fashion. The HTC Zoe mode on the camera captures a few seconds of audio and video, rather than just a still photograph, that allows you to re-live the sounds and sights of the captured moment. Whether this is your child’s first words or you leaping off a cliff in the pristine waters of Hawaii, HTC Zoe offers an inspired way to relive the magic.

But what to do with all those captured images? For most people, the best of those photos are shared on Instagram, Twitter, Google+, and Facebook and the majority of the captured images and videos live a lost life never to really be re-lived again buried in a phone’s memory. Not so with the HTC One as you can create quick, automatic video highlights–akin to an animated slideshow set to music with awesome transitions–that bring your photos to life again for sharing on your phone, to a social network, or for viewing on the silver screen of your HDTV at home.

For the most part, this is a consumer experience with easy controls and smart software that allows you to do things easily.

Lumia Icon. Dual LED flash, best-in-class optical image stabilization, and an unrivaled low light photography experience makes the Icon such an iconic phone for photographers. Nokia’s experience, unlike HTC’s, is geared more for more advanced shooters once you dive deeper into the camera’s features, but that’s not to say that the average consumer won’t be able to enjoy the superb low light capabilities of the six-element lens ZEISS optics camera.

Backed by a 20-megapixel sensor, the Icon allows the photographer not only the ability to capture fine details, but it also allows users zoom in by cropping their images without much loss to image quality. It’s like digital zoom, but the results are magnitudes better than what you get on the iPhone or a Galaxy phone, and it comes without the heft of optical zooms such as those on Samsung’s Galaxy Camera and Galaxy S4 Zoom. Check out the details extracted at a pixel-for-pixel level of the rock formation from this image below: 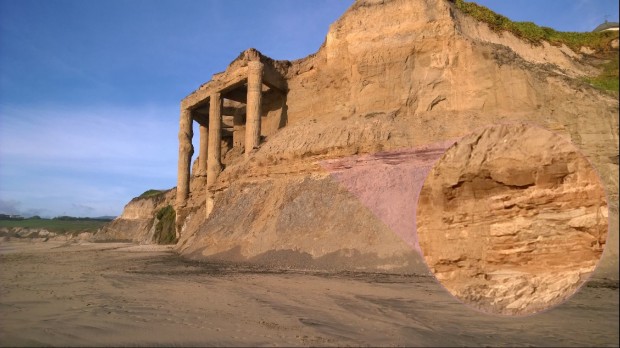 In my experience using both the HTC One and the Lumia Icon, I feel that the Icon’s low light performance is better than the One’s, pulling in more details.

Though the Nokia Pro Camera app doesn’t give you instant filters, it does give you access to a variety of manual controls, making it a nice alternative to a more bulky DSLR setup. Shoot in automatic mode if you don’t feel like making this adjustments, but you’ll be handsomely rewarded if you do with some inspiring and creative results. Moreover, Nokia’s free Creative Studio app also allows you to edit photos and add filters in post-processing.

Where the Icon really shines is in video recording. With isolated stereo surround sound recording of audio thanks to the phone’s four built-in microphones, the Lumia Icon will be able to record true stereo audio for a more cinematic feel.

Verdict. The HTC One is a great all around camera phone and definitely inspires people to do more with their memories thanks to HTC Zoe and the quick slideshow creation software on the One, but Nokia delivers a superior photography experience that beginners and professionals could enjoy. This is a tough call since we feel that HTC’s software is inspiring while Nokia’s technology delivers impressive results with images that have a nice character to them. In the end, Nokia wins this battle thanks to the isolated stereo surround sound audio recording, superior OIS and low light image capture, and more advanced features should you choose to take advantage of them that would lead to more creative images.

HTC Sense or Live Tiles? The experience may not be as dissimilar as you think despite the fact that the One runs Android and the Lumia Icon is a Windows Phone power house. Both phones are backed by copious amounts of RAM, speedy processors, the ability to connect to some of the fastest 4G LTE networks, and capacious high resolution full HD 1080p displays.

HTC One. The HTC One is an Android smartphone that has been cloaked and concealed with HTC’s custom interface called Sense, now up to version 5.5. With HTC Sense 5.5, you have a new home screen called BlinkFeed, which looks and performs similar to Windows Phone’s Start Screen with the Live Tiles. Rectangular boxes appear on BlinkFeed and each box gives you a look at the latest news, what your friends have posted to Facebook or Instagram, and your newest photos you’ve captured with your Ultrapixel camera. It’s a nice, easy way to stay up-to-date and in touch, and the experience is not unlike what Windows Phone promises.

You still have your notification bar with all the latest notifications, an app tray for apps downloaded through Android’s robust catalog on Google’s Play Store, and access to all the readily available digital content for the ecosystem.

Lumia Icon. Similar to BlinkFeed, the Icon relies on Windows Phone’s Live Tiles, which gives you access to information at a glance. I do like the paradigm and I think it’s more efficient than traditional widgets and managing multiple home screens on a standard Android handsets. Here, you have a vertical scrolling list of Live Tiles and a second screen for downloaded apps in alphabetical order.

The Icon doesn’t really have much access to Google’s ecosystem–like services such as Google Now, Google Voice, an official YouTube app, and Google Drive–due to Google’s spat with Microsoft. However, there is a growing collection of apps available for Windows Phone, whose catalog is still a distant third behind Android and iOS. The most notable titles are there, and for most other things you need there are third-party titles to fill the gap. For example, in lieu of Flipboard, there is a Flip Mag app that attempts to do a similar thing.

What I appreciate most with Windows Phone is that I can arrange my contacts into groups. I have a group with just close friends, and a Live Tile created for that group so that whenever someone tweets, write a Facebook update, or upload a new photo, my Live Tile would also update to let me know what my best friends are up to. It’s a nice way to keep in the know–read: stalk–people you talk to frequently or not communicate with regularly. It’s also an easy way to manage my contact list while still keeping everything integrated. The same John Doe from my Google Contacts is integrated with Facebook, LinkedIn, and Twitter and I get John’s photos and updates directly within his contact card.

Verdict. Windows Phone may offer an easy approach to handling most tasks and keeping up to date with the news and relevant social feeds. However, HTC Sense does a commendable job of replicating some of these features without directly copying Microsoft. Additionally, Android’s more robust ecosystem of apps and digital content takes the lead and the victory will have to go to the HTC One in this case.

Both the Nokia Lumia Icon and the HTC One could be seen as two of the best smartphones out there. Some would argue that the HTC One is the best Android phone while we’ve already crowned the Icon as the best all-around Windows Phone, barring Nokia’s Lumia 1020’s photo crown. It really is up to you on how you use your phone. In our test, the Lumia takes the clear lead in the camera department while the HTC One’s reliance on the Android ecosystem gives it an edge in that department. With either choice, you’re getting a pretty nifty UI that helps you organize your digital life. Whether you rely on Bing or Google for your Internet services may also play a factor in which platform you choose. Overall, though, you can’t go wrong with either phone.