As expected the HTC One X Android 4.2 Jelly Bean and Sense 5 update has begun rolling out, a roll out that fits into the timelines and predictions that we had heard previously about HTC’s highly anticipated update.

Over the last few weeks, it became increasingly clear that an HTC One X Android 4.2 Jelly Bean and Sense 5 update was close. We heard a prediction from an insider who claimed it would roll out in August. We saw French carrier SFR claim that it was ready to roll the update out in late August. And all along, we had heard that it would be out sometime this summer. Turns out, these were dead on. 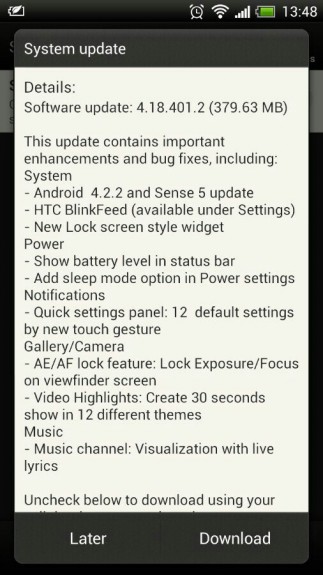 The HTC One X Android 4.2 and Sense 5 update has hit Europe. Photo via lotsspam.

The HTC One X Android 4.2 Jelly Bean and Sense 5 update has begun rolling out to Europe with several countries receiving their upgrade to Android 4.2 and Sense 5 today. The update is a big one, measuring in at well over 300MB in size and it will bring the device up from Sense 4+ and Android 4.1 Jelly Bean, updates that it has been running for quite sometime.

Specifically, the device will see the benefits of Android 4.2 Jelly Bean as well as the benefits of Sense 5 including BlinkFeed and a new look for the device’s user interface. It’s a massive update for the HTC One X and it’s one that should delight owners.

Of course, the roll out is likely going to take a bit to hit other countries. Typically, HTC makes sure that the software doesn’t have any catastrophic bugs before it rolling it out beyond the initial regions. Insider @LlabTooFeR claims that there is no timeline for Asia just yet but we should see it roll out there in the next few weeks.

As for the United States, AT&T has been slow to get its HTC One X updated and it could be weeks, or months, before the update arrives. The device’s roll out has been pegged for arrival though so AT&T HTC One X owners can rest easy.