If you are in the market for one of the hottest AT&T phones on the market and wonder which screen looks best, YouTube user foxfire235 has three hot new phones side by side for you.

He takes a quick look at the differences between the top 3 AT&T smart phones, the HTC One X, Nokia Lumia 900, and the iPhone 4s.

Basing it purely on the specs of the screens, the iPhone 4s should have the best display right? Not so says IntoMobile and foxfire235. 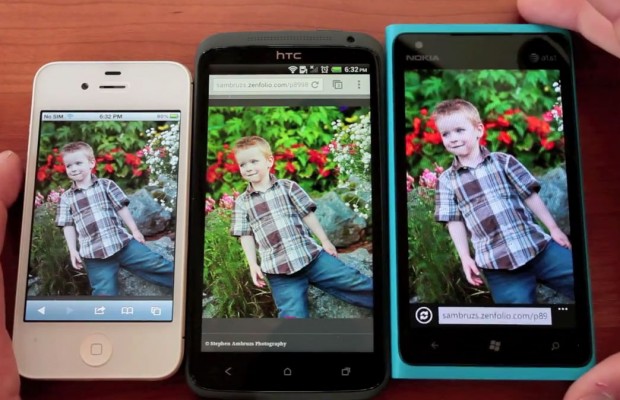 Using the same photo on each phone, he seems to really like the Nokia Lumia 900. He says that the Lumia 900’s stands out most, even though it’s over saturated, calling it the “best viewing experience”.

I disagree. Even though the iPhone 4s has a tiny screen and almost the same pixel density as the HTC One X, I think it’s rendering of this photo looks best. It looks more natural to me and natural is what we aim for when we take photos, right?

The HTC One X looks like a color filter as been applied to it making the colors look exaggerated. The way I see it, the top spot goes to the iPhone 4s, next the Lumia 900, and then the HTC One X. If you watch the video below in HD, you can judge for yourself.

If I were to ignore the screen and pick on purely on device desire, it would go Nokia Lumia 900, HTC One X, and then the iPhone 4s.

Which looks best to you? Which phone would you rather have overall?