The HTC Rhyme, which was originally rumored as the female-targeted HTC Bliss, will be making its way to Verizon Wireless on September 22nd with two bundled accessories. The Rhyme is said to be coming in plum, and the handset’s release date of 9/22 would be just days after the HTC announcement in NYC on 9/20.

The device will come with a special HTC charm, also of plum coloring, that will glow when there’s a call or message or notification waiting for a user’s attention. The charm will plug into the phone’s headset jack. 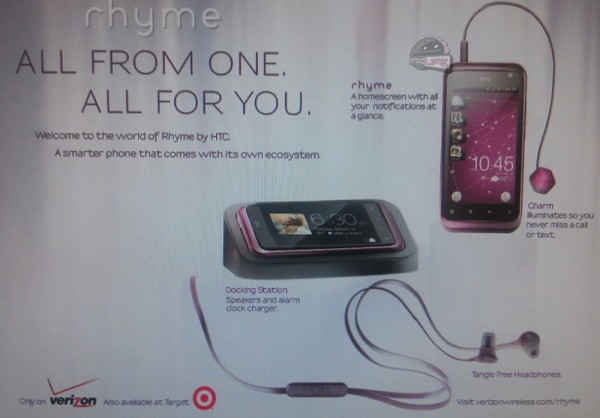 There will also be a tangle-free pair of earphones bundled with the Rhyme, though it most likely won’t be Beats Audio earphones given the speculated $50 pricing of the phone on a two-year contract. The device will also feature a unique dock, though it’s unclear if the dock will be bundled or will be available as a separate package from the phone.

You can visit the landing page for the Rhyme on Verizon.

The Rhyme will have a 3.7-inch WVGA display, front- and rear-facing cameras, and Android. Preorders are said to start on September 21.

Update: The HTC Rhyme will be available for $199 on a two year contract starting September 29th.