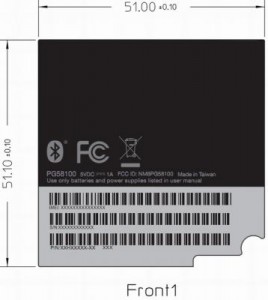 The HTC Sensation, one of the most powerful phones, is sitting at U.S. regulatory agency FCC for approval. The device features a dual-core 1.2 GHz CPU, high resolution qHD display, an array of wireless radios and sensors, and can be seen as an HTC EVO 3D for Sprint without the 3D screen or dual rear cameras. The HTC Sensation was announced for U.S. carrier T-Mobile, so FCC approval would mean that the handset would be a little bit closer to release.

The FCC label shows that the device model number is HTC PG58100, which some sites have mistakenly reported as the HTC Doubleshot. However, the Doubleshot has PG59100 as its model number. The Doubleshot is also said to be coming to T-Mobile USA as the myTouch 4G Slide.