If you’re not too fond of some of HTC’s Sense features, there’s good news for you. According to some leaked screenshots of HTC’s Sense UI 5.5, BlinkFeed will be optional, and you’ll be able to toggle the feature on and off. The screenshots come to us from Android Revolution HD, and if they’re real screenshots, users will be getting more control over features, as well as some new camera features.

HTC users were able to disable BlinkFeed in the past, but it required that you go into settings and change your default home screen, which is a bit cumbersome. In Sense 5.5, however, there appears to be a quick-access toggle switch to BlinkFeed in the upper-right corner that can quickly disable the feature, and re-enable it later on if need be.

If you’re familiar with what BlinkFeed is, it’s a new feature that HTC introduced in its Sense 5.0 UI skin that essentially replaces the traditional Android home screen with a list of curated news stories and social media updates, as well as integrating things like calendar appointments. It can come as a bit of a suprise to new HTC users, but thankfully, it looks like you’ll be able to quickly disable it. 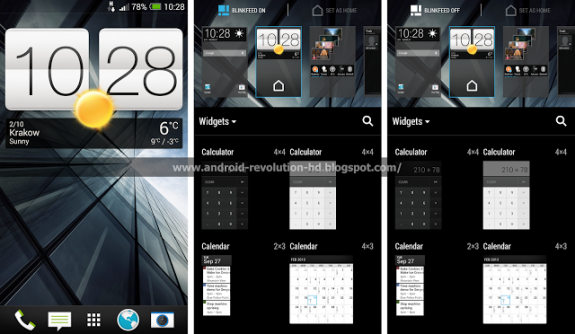 Furthermore, there are some updates to the camera app, with Zoe moving into the options list now, and there’s also a new “dual capture” feature, which we’re guessing is something like a feature on Galaxy handsets, where you can take a photo with your rear and front-facing cameras at the same time.

There’s also been some change to the recent apps view, and the thumbnails now fill up more of the page, leaving less white space (or black space, rather). The keyboard also appears to be getting some changes, with the expansion of options for adding smileys and such to your text messages.

Of course, these are merely just leaked screenshots, which may or may not be real, so we’re taking this with a grain of salt, but we certainly wouldn’t be surprised if HTC brought these new features to the latest Sense UI update. As far as when we’ll see the new version, it’s possible that it could release alongside the HTC One Max launch later this month, with the update going out to the HTC One as well, but we’ll ultimately have to wait and find out.