The issue of contention that Apple has with HTC in regards to the import ban behind the HTC One X for AT&T and the HTC EVO 4G LTE for Sprint is the way that HTC Sense and Android handle app associations with linked content. Specifically, for example, Apple says that it has the patent for when you click on a physical address. On Android, you’d be greeted with a pop-up box that asks you which app you would want to launch when a physical mailing address is clicked, whether it be Maps, Navigation, or any other number of third-party GPS apps like TeleNav or Navigon. That, for Apple, is a no-no. 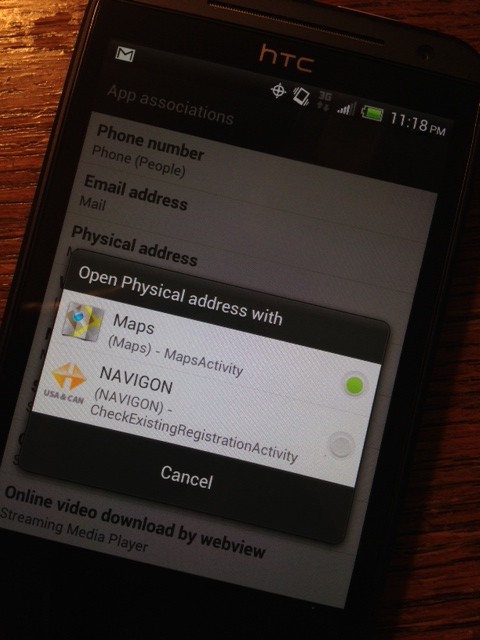 The linked associations between a link and the pop-up list of relevant apps that can handle that linked action is still present on the international version of the HTC One X, and presumably, that’s what Apple had grabbed when it conferred with the International Trade Commission and U.S. Customs to enforce the import ban.

According to The Verge, to HTC’s credit, however, the company did implement software that would potentially not infringe on Apple’s patent claims. HTC’s workaround is by all intents and purposes a lengthy workaround for consumers.

On the HTC EVO 4G LTE and AT&T One X, rather than that pop-up box when you click on an actionable link, users have to go into the settings menu and set up how they want certain links handled. So now, you can configure HTC Sense 4.0 to directly open your favorite third-party GPS navigation app every time an address is clicked, which means you won’t have an option for when that address is clicked should your choice vary from time to time.