It looks like the LG Thrill 4G and the HTC Status may have been tipped for launches on AT&T this month. According to an image obtained by Android Central, LG’s glasses-free 3D phone and HTC’s “Facebook phone” will both be launching sometime in July. 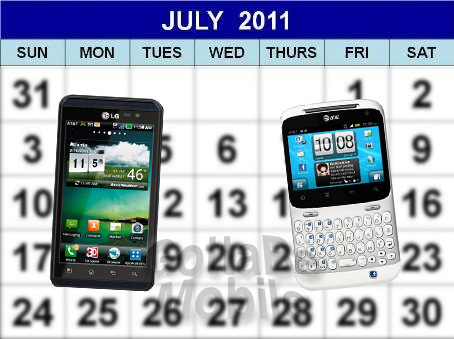 The leaked image (bottom) shows what appears to be an internal inventory screen, listing both phones as arriving in “July.” Neither phone launching this month would be a major surprise, as we have known that both the Thrill and the Status would be hitting store shelves this summer.

Known as the Optimus 3D outside of the US, the LG Thrill was announced in March. It sports a stereoscopic display, much like the EVO 3D on Sprint, and will operate on AT&T’s HSPA+ “4G” network. The Status is also known by a different moniker outside of the states (HTC Cha Cha). It is the long-rumored “Facebook phone” – sporting a full QWERTY keyboard and offering a dedicated Facebook button.