HTC Takes the One on Tour to Win Customers in SF

Smartphone-maker HTC, which had struggled in recent years having a much smaller marketing budget than larger rivals Apple and Samsung, is trying to win over some customers with a more aggressive marketing campaign for its HTC One flagship smartphone, slated to go on sale at major U.S. carriers later this month. The company is lashing back and is offering a number of attractive promotions to hopefully win over some smartphone users who may be on the fence about a flagship Galaxy S series device or an iPhone. HTC USA’s most recent publicity stunt will take the HTC One on tour, with a destination in San Francisco, California to allow prospective Silicon Valley technophiles some time to play and use the phone before buying.

In its Facebook posting, HTC says that the HTC One will be on display and on-hand for prospective customers to look at and take for a spin starting at 10 AM today, Friday, at the Embarcadero in San Francisco’s waterfront district. It’s unclear what other cities are targeted with the One tour.

The grassroots campaign is not unusual. When Samsung had launched the Galaxy Tab and the Galaxy Camera in the U.S., it opened a number of pop-up kiosks in malls in an attempt to show customers the value of these new product categories. HTC’s efforts is not unlike Samsung’s, where customers are encouraged to try, but they’ll have to go to a partner retailer to buy.

And while HTC is showcasing its phones, Samsung is also targeting Silicon Valley urbanites with huge campaigns in San Francisco’s underground railways. Muni and BART train stations across the city are plastered with Sasmung’s Galaxy S and Galaxy Note advertisements, highlighting corporate security and enterprise protection. 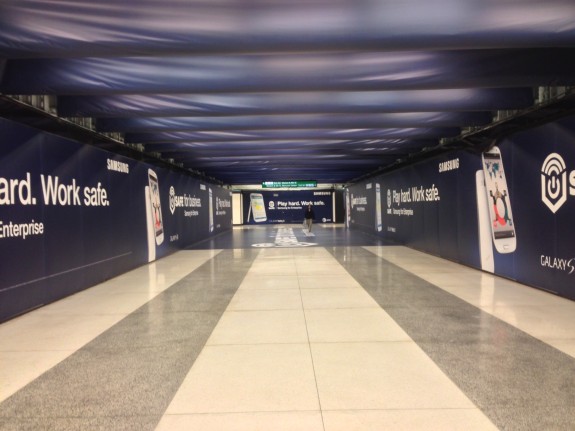 As HTC is stepping up its game, we’re seeing the company mince no words. When Samsung launched the Galaxy S4 smartphone, HTC crashed the New York City event. This isn’t the first time that tech rivals have crashed each other’s parties–in 2010 when HTC launched its Desire series flagship products, Nokia had crashed HTC’s parties thanks to a scheduling conflict where media had to choose whether to attend the Nokia World conference that was happening simultaneously to the HTC product launch. And HTC wasted no breath in blasting the Galaxy S4’s design decision to go with plastic parts in an effort to play up its zero-gap machining on the HTC One’s design.

Through carrier AT&T, HTC is offering a multimedia HD cable as a free accessory while T-Mobile USA is offering up a free car dock for HTC One purchases. HTC is also throwing in a $100 trade-in offer if you send them an old smartphone as part of a not so ‘quietly brilliant‘ campaign.