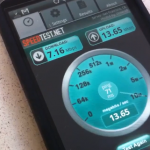 The HTC Thunderbolt is Verizon’s first 4G LTE phone and it is ridiculously, blazingly fast. It is hands down the fastest phone I’ve ever laid hands. I’ve been using the HTC Thunderbolt since I picked it up this morning and I still can’t believe how quickly it downloads and uploads data on 4G LTE.

Here’s a video of the HTC Thunderbolt running on Verizon’s 4G LTE network. Speedtest.net is an app that tests latency and download/upload speeds by sending data back and forth to a server near you. Let’s just say that Verizon’s blowing the doors off the competition…

I live in San Francisco and tested the service at a shopping mall far from downtown. I’ve also been using the Thunderbolt in my home office, which is in a relatively sparsely populated neighborhood on top of a hill. AT&T call quality is generally good in this part of San Francisco, but I do get the occasional dropped call.

We’re working on a comprehensive HTC Thunderbolt Review and will include more videos of what it’s like to use it on the 4G network. Pages load incredibly fast and it feels like the device is connected to a speedy WiFi network rather than a wireless carrier’s network.

One frustration I’ve had with the device so far is that I can’t upload a short video to YouTube from the device. Instead, the Thunderbolt gave me a notification that I needed to connect to a WiFi network. How am I supposed to use unlimited data with limitations like that?

At the same location, AT&T’s 3G network is significantly slower than the Thunderbolt on Verizon’s LTE network.

The 4G LTE network may get bogged down as more consumers buy the HTC Thunderbolt and other 4G devices, but this is a hell of a good start.

We’ll update you when the HTC Thunderbolt review is live.