HTC is hoping to leverage its $300 million partnership with Beats Audio to regain lost ground in the race for smartphone dominance as it is rumored that the smartphone-maker is preparing to launch a streaming music service. Details are scarce right now on how the service will work or what features will be included, but it could help HTC differentiate its smartphone offering from stiff competition at the high-end against Samsung and Motorola Mobility and on the low-end by new Chinese smartphone entrants like ZTE and Huawei.

HTC wouldn’t be the first to introduce a streaming music service, if that’s the direction the company is headed in. Motorola had introduced MotoCast and ZumoCast, which allows customers to stream the music–along with videos and other files–form their computer’s hard drive at home or work to their phones, giving them access to all the content they need without having to worry about the amount of storage on their phones. Nokia, on the other hand, has introduced streaming music in a different form thanks to Nokia Radio Mix on the company’s new Windows Phone 7 Lumia handsets. The service is still awaiting the final approval from studios and record labels in the U.S., but allows users to create customized playlists on the Internet for free. Additionally, unlike Pandora, users can also download content to play at a later time where there is no Internet connection. 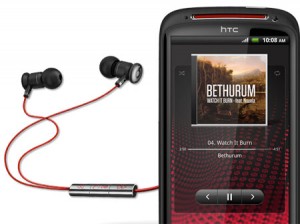 HTC has ambitions on bringing Beats Audio integration to Windows Phone as well, but that will be dependent on Microsoft to loosen up restrictions for the platform.

Another venue that HTC could be headed in is to create a digital store front and streaming service, like Google Music, iTunes and iTunes Cloud, and Amazon MP3 with Amazon Cloud Player. This way, HTC could make additional revenue from the content being sold. The company already has a movies store in the form of HTC Watch.

Having its own separate storefront may also create brand loyalty among HTC phone owners as they may become tied to the ecosystem. This way, HTC smartphone owners may not feel as compelled to switch to a different manufacturer as their digital content would be locked to an HTC handset.

The service is speculated to be announced at Mobile World Congress.

In addition to the streaming Beats service, HTC is also rumored to debut a tablet and a number of new smartphones at Mobile World Congress.