The HTC Vigor, among one of the first devices to utilize a higher resolution 720p HD display, has been catching a lot of buzz lately, and it appears that Verizon may have settled on the final branding name for the device. Originally revealed as the HTC Vigor through leaks, it was believed that Vigor may be the codename and not the product name for the next-generation smartphone. Successive leaks suggest that Verizon Wireless may brand the smartphone as the HTC Droid Incredible HD, the HTC Thunderbolt 2, and the HTC Rezound. 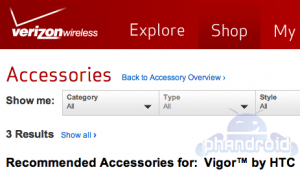 Now, with Verizon posting up an accessories page that recommends three generic accessories for the ‘HTC Vigor’ smartphone, there is indeed a greater chance that the carrier has finally agreed to the Vigor branding.

The accessories recommended by the page are for general accessories meant to fit any phone and are not specific to the HTC Vigor itself, but the mention of the un-announced and un-released smartphone on the carrier’s website suggests that the device may be close to landing.

In addition to the 720p HD display, the Vigor is widely believed to sport Beats Audio for an enhanced audio experience following HTC’s announcement that the company had invested in the audio company. The device will be HTC’s second 4G LTE smartphone following the launch of the Thunderbolt, which is the first 4G LTE for both HTC and Verizon Wireless.