HTC Vive Hands On: Three Things You Should Know

Which Oculus Quest Storage Size Should You Buy: 64GB or 128GB?

How to Stop Facebook From Accessing Contacts, Call Logs & Texts

The HTC Vive is part of the smartphone company’s plan to claw its way back from the financial cliffs. Has their foray into virtual reality (VR) paid off? Here’s what we think after a night of playing with the HTC Vive.

If you haven’t been paying attention, you might not realize it – but we’re kind of in a resurgence for VR. This year, we’ll see the launch of three high-tech, consumer VR headsets (you might also see them called HMDs, for head-mounted displays). There’s Facebook, with the Oculus Rift, HTC and Valve, who worked together on the Vive, and Sony, who will be launching the PlayStation VR headsets later this year. 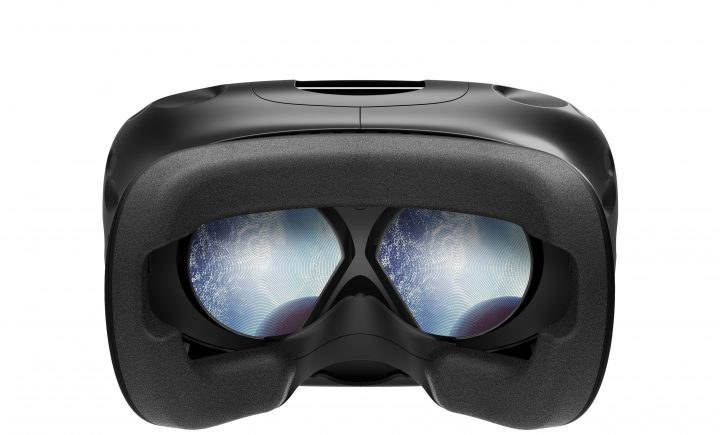 There is clear consumer demand for the new platforms. Both Oculus and HTC almost immediately sold out of expected stock, with delivery dates starting in March and April, then quickly getting pushed out into summer timeframes. When HTC opened the Vive for preorders earlier this year, fans jumped, with 25 units selling every second – 15,000 in the first ten minutes, according to one HTC employee.

Today, a Vive showed up a little unexpectedly at my doorstep. I say unexpectedly, because according to HTC’s order tracker, my box hasn’t even shipped yet. Shipping issues have plagued this year’s VR launch, and while the lion’s share of the problems affect with the Oculus Rift, the Vive hasn’t exactly been immune. HTC has made a commitment, however, to ship all their pre-ordered headsets on time – something that Oculus can’t say.

The HTC Vive feels like a really polished engineering prototype

The box for the HTC Vive is much bigger than was expected. To tell the truth, it’s bigger than it needs to be; the eventual second version will probably be better designed. Originally, as part of the Vive’s development pathway, there was going to be a new model after the final developer units, a further refinement of the platform; that’s what would be sold to consumers. 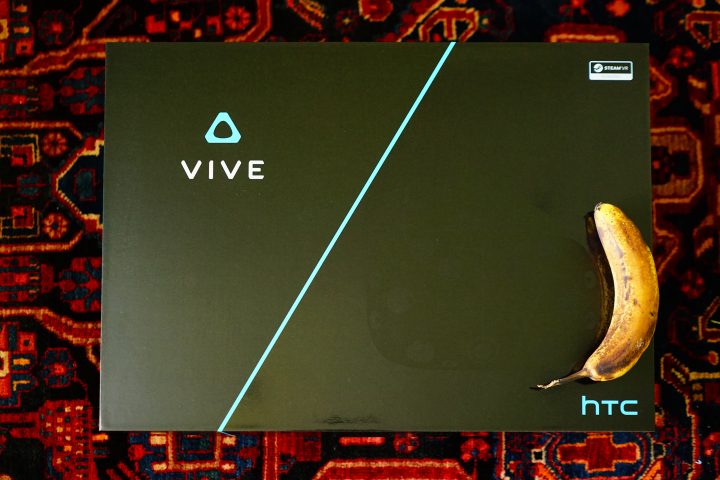 The HTC Vive, in its really big box. Banana for scale.

HTC decided that they couldn’t really afford to wait, what with the Rift of Damocles hanging above their heads. Thus, with a few minor tweaks, the Vive “Pre” turned into the shipping consumer model – and while it undoubtedly saved HTC a boatload of money and allowed them to hit the market faster, it also shows in the experience of the headset.

Everything about the Vive feels slightly unfinished. A set of cables runs down the back of your head, and if you want to listen to audio, you have to plug the included earbuds into the cable that’s floating behind you. None of this is really a complaint – we’ll save that for the software – just some things you might notice as you unbox your headset and go about setting things up.

Setting up the HTC Vive is a complete nightmare

Yes, that’s clearly an overstatement, but for good effect – the Vive is without a doubt the most frustrating piece of technology I’ve ever had to deal with in my own home. A quick instructions sheet, included in the Vive box, tells you to go to HTC’s website in order to download the drivers for the HMD. Once you double-click on the installer, your computer will be able to walk you through most of the rest of the process. 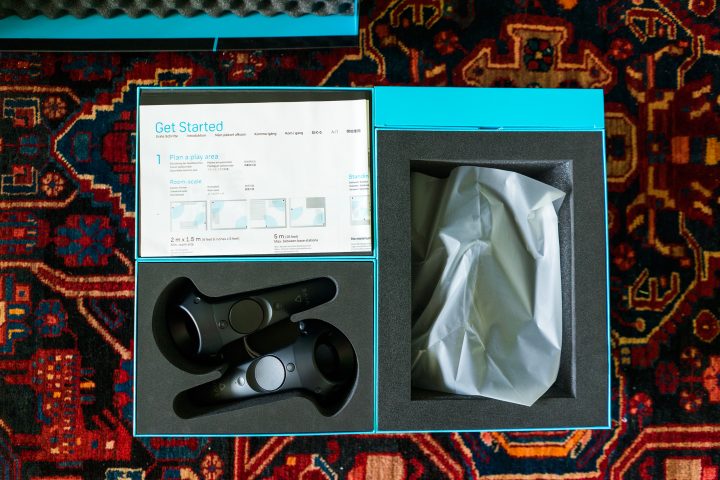 The box is too big, but everything is neatly packaged.

The biggest difference between the Rift and the Vive (at least until the Rift’s controllers launch later this year or early next year) is that the Rift enables what it calls “roomscale” VR. Roomscale is this concept of being able to move around your virtual world, not just sit and play video games while wearing a helmet. It adds a huge amount to the experience, and once you try it out for yourself, it’s something you won’t want to live without.

There are countless arguments being waged on the Internet over which is superior – seated VR video games, or these more expansive, roomscale experiences. While it’s not cut and dry, roomscale definitely adds something to the experience that, without trying a game designed for movement, is hard to understand. When you stand up and see your controllers, and start to walk around – it’s easy to feel like you’ve been transported to another world.

To make a short story long: as incredible as roomscale VR is, its setup was the opposite. In order to keep track of where your headset and controllers are in 3D space, HTC includes two base stations in the box. It’s your responsibility to set these up such that there is significant overlap, but keeps your play area covered. We used a couple of light stands; the bottom of each unit has a standard tripod thread. 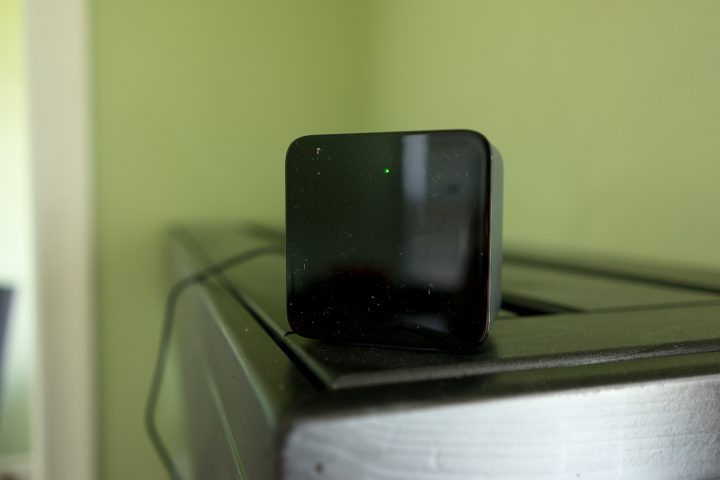 This is one of the two base stations that tracks where you in the virtual world.

After you set up the base stations, you plug a box into your computer (you will need to connect your monitor and Vive to the computer at the same time, so plan accordingly) – video and USB 3.0 – and then plug your Vive into this box. Once everything’s up and going, the software will walk you through calibration. You’ll draw out your play area, and you’ll calibrate where the floor is (pro tip: if your in-game floor is too high after calibration, make sure your controllers are facing down on the floor when you calibrate).

Periodically, you’ll need to re-do this calibration – I performed it 5 or 6 times over the course of the evening, and the Steam forums are filled with people complaining about the floor not staying at the correct height. Even once everything was calibrated, the Vive would still lose tracking periodically; when that happens the displays turn a bright, pale blue, which is pretty jarring to the eyes.

Related to the setup: HTC doesn’t include your pre-order codes in your account or Vive box. I contacted HTC’s Support to ask where mine were; after being told to check my email (thanks for that tip!), the support agent said that I should contact them in 48 hours, as the code will probably appear before then. It’s super frustrating to get this awesome new toy, only to be told that you can’t play those games yet.

When stable, the HTC Vive is a mind-blowing experience

So far, the Vive feels like a typical HTC product – hardware that looks and feels really nice, and software that’s pretty buggy. These are bugs mostly related to rushing the product out, however, and setting up a new Vive in six months is very likely going to be less stressful. 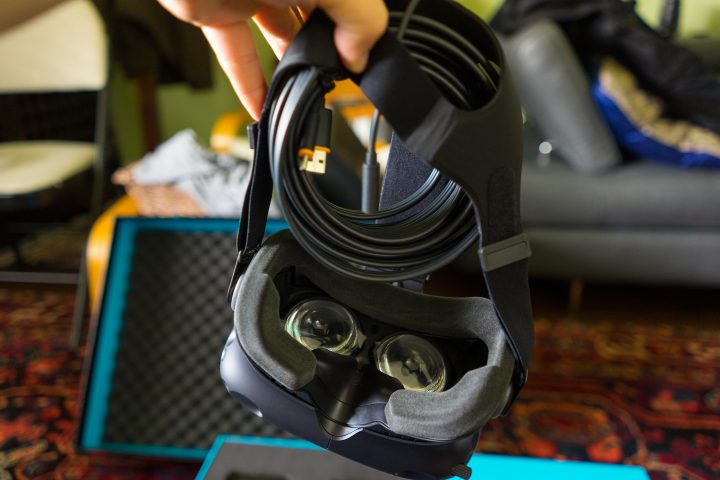 The Vive is awesome, but a little messy. The first gen is definitely an enthusiast device.

It might sound like I had a pretty negative experience with the Vive, and for the most part, that’s true. The constant tracking and disconnects made playing anything super frustrating (I should point out that my spouse played it for an hour straight without a single problem). And yet, there were moments in between, where I could get a long stretch of gameplay in, that really showed the potential of the platform.

Valve has included a free bit of software called The Lab, and it’s available on Steam to anyone who wishes to download it. Designed for VR from the ground up, it’s a little series of games and shorts that get you used to the idea of interacting with virtual worlds. One of the first parts of the game has you playing fetch with a little robotic dog, and the feeling of “presence” (when you feel “there” in a VR game) is so strong, you reach down and scratch it on its belly.

Being able to see the controllers in your VR space is amazing. It adds so, so much more to the experience, and it’s key to feeling like you’re really there. They look exactly the same in game and in real life, so it’s easy to keep track of where your hands are. 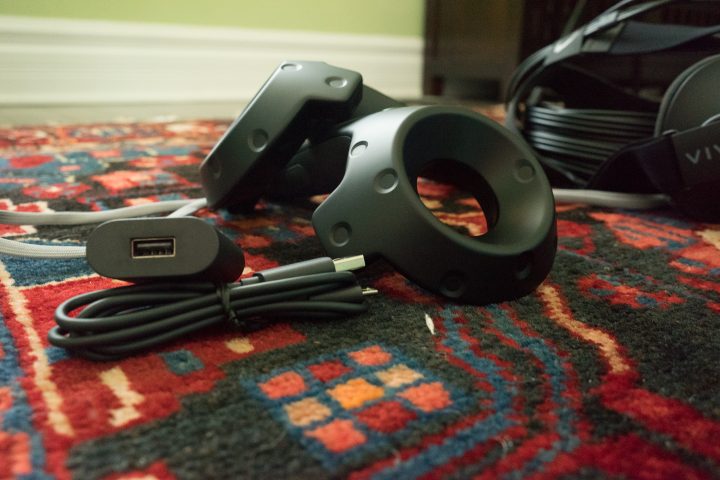 HTC includes two USB chargers, one for each controller – a smart, thoughtful touch.

It’s true that the pixels are noticeable; you’ll go through phases where they completely disappear for a long stretch, then you’ll look at something and see what’s called a screen door effect, caused by the black outlines surrounding the pixels. For the most part, this won’t affect your game, but it does make reading text sort of unpleasant.

Just tonight’s glimpse of modern VR, and the presence it can generate, has sold me that this isn’t going away soon. At the same time it feels like video games you’ve been playing for years, and also something completely new and unexpected. We’ll be spending some more time with the Vive over the next week as we write the full review, so be sure to come back for more. If you have any questions about how the Vive works, be sure to shout out in the comments section.