HTC is finally ready to show off the new marketing campaign it’s cooked up to take on the feature heavy commercials of rivals Samsung and Apple.

The new advertisements are part of a broad campaign that the company calls Change. As part of the program HTC is releasing a series of advertisements around the world that are designed to connect with potential users by appealing to the user’s thirst for not just change, but change for the better.

According to a press release from the company, with the advertisements HTC is trying to “to demonstrate [it’s] role as a change maker.” As part of that, the ads will follow Robert Downy Jr. as he takes on the mantle of an instigator of change, going to different places and describing how HTC has brought innovation to the smartphone space. 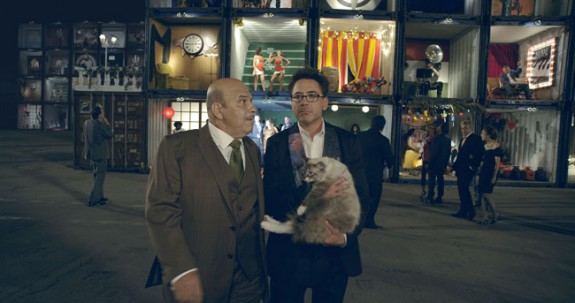 Throughout the entire series of advertisements, viewers will be treated to reinterpretations of the company’s name with Downy Jr. declaring that HTC can stand for whatever people might want it to in the campaign’s first commercial. During that ad such names as Humongous Tinfoil Catamaran and Hold This Cat were both mentioned as stand-ins for what HTC’s initials actually are short for: High Tech Computer.

In what’s likely to get people talking more about the ads, HTC says that it’ll also add a level of “social engagement and experiential actives” to the ongoing campaign. It’s also promising that the ads are a part of telling a long-term advertising narrative. These marketing activities will put users in the front seat as they experience each random interpretations of the made up HTC acronyms for themselves. Users in the United Kingdom, the United States and Taiwan can look forward to these events, though every internet user wolrdwide can use the random HTC acronym generator to create their own interpretations right now on HTC.com

That last bit is key as it seems HTC is relying on the social engagements, the appearance of aloofness in its marketing materials and the star power generated by Robert Downy Jr. to connect with consumers. The company says that Downy Jr., contributed to the “creative direction” of the advertisements along with the company’s marketing firm 171 WordWide.

If the company’s plan works it could go a long way to helping HTC making inroads with users. Until fairly recently the company’s advertisements had been relatively low-key. By putting the spotlight on the things it does differently like the HTC Blinkfeed integration, and BoomSound audio enhancements, it could finally put the company on the right track to competing with Samsung.

That company’s advertisements have increasingly highlighted the software-centric features that only its smartphones offer. Clearly, for Samsung that message is resonating with consumers, earlier this year the company announced that the Galaxy S4 was its fastest selling smartphone to date.

On the other hand, opening may be opening up a branding can of worms. Users could easily reinterpreted HTC to mean both good and bad things, cheapening the effectiveness of the company’s already fragile brand.