One of the breakout mobile players of 2011-2012, Chinese smartphone-maker Huawei had taken the stage at Mobile World Congress to take on industry veterans in the consumer Android tablet space–like Asus, Samsung and Motorola–to announce a 10-inch version of the company’s MediaPad. Huawei had announced the MediaPad in a 7-inch form factor last year that is sold as the T-Mobile Springboard 4G on T-Mobile USA and as the MediaPad for business customers on AT&T’s network in the U.S. Now, at MWC, the company’s adding a 10-inch variant to the mix. 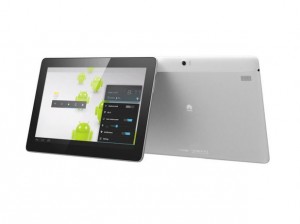 Like Huawei’s Ascend D quad series smartphones, the MediaPad 10 will feature a quad-core mobile ARM processor made by Huawei, showing the company’s aggressive push to get even more embedded in the mobile space. With a 1.5 GHz quad-core K3V2 processor, the MediaPad 10 also features Android 4.0 Ice Cream Sandwich, a 10.1-inch full HD 1920 X 1200 IPS LCD display, a whopping 2 GB of RAM, and support for both HSPA+ and 4G LTE connectivity, the former of which is also dubbed 4G by American GSM carriers AT&T and T-Mobile.

The company promises that the MediaPad 10 will be available globally starting in Q2.

Aesthetically, the device utilizes an aluminum back side, and given the company’s attention to quality on the original MediaPad 7, it seems that this device will be slim and well constructed.

“Most consumers use tablets for entertainment purposes such as gaming, viewingmultimedia content, browsing the internet and reading e-books,” said Richard Yu, Chairman of Huawei Device. “We have created the HUAWEI MediaPad 10 FHD to excel in all of the entertainment capabilities including speed, power, web-browsing, high definition display and audio, and packaging it all in a compact and portable body.”