The Huawei Honor 8 delivers Nexus quality at budget pricing. There are a few compromises, but the $399 price is enough for many buyers to overlook the shortcomings.

Win an Honor 8 from GottaBeMobile

The Nexus 6P is a nice flagship phone from the company that holds the keys to the Android operating system. How good is the Huawei Honor 8? Should people who prefer a smaller device take a serious look at this budget phone? 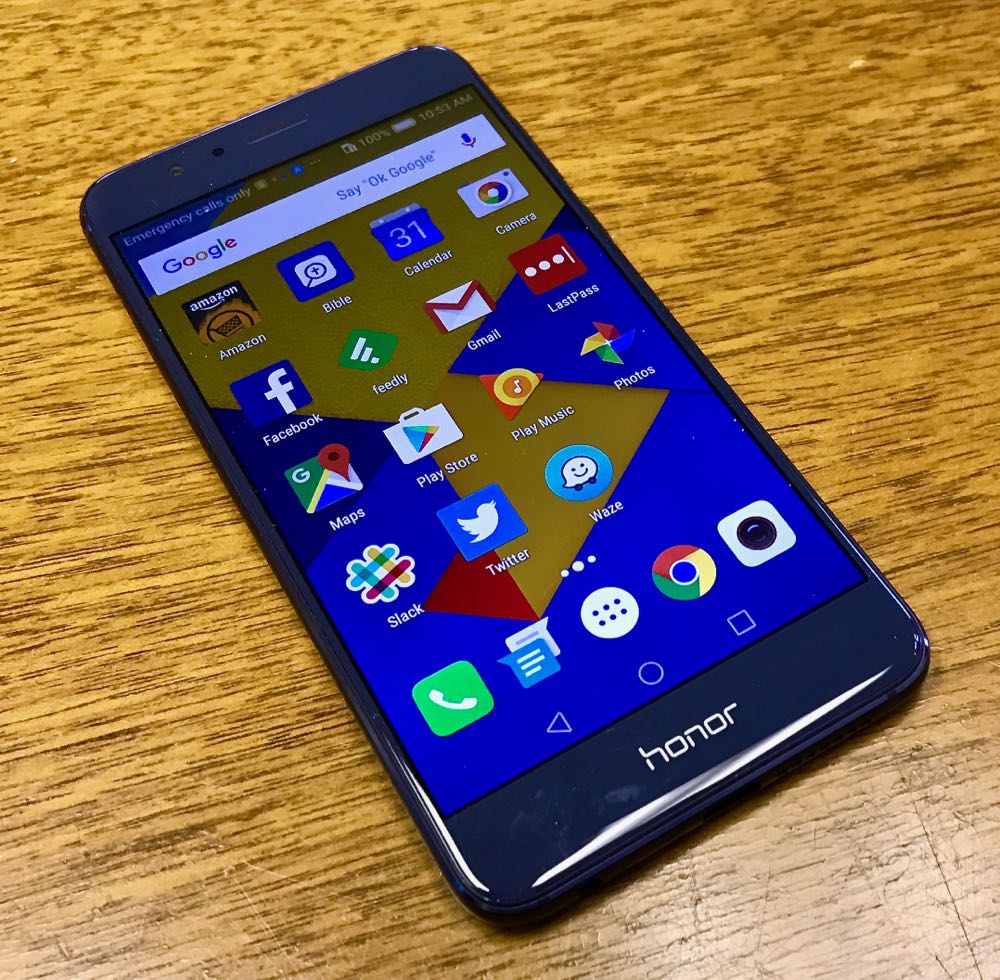 A few years ago we’d call the Honor 8 a large phone with a 5.2-inch screen. Now with phones like the Samsung Galaxy S7 Edge, the Nexus 6P and the iPhone 7 Plus, the Huawei Honor 8 feels small.

If you’re looking for an alternative to the Galaxy phones or the iPhone, the Huawei Honor 8 offers a compelling choice, especially for people who don’t want to pay more than $400. It has a nice design that holds up to normal wear and tear. The battery life makes us wonder why the established players can’t keep their phones running as long.

However, the camera and the software fall short. The EMUI software that Huawei pre-installs over the top of the Android OS doesn’t give us the best of Android.

This 5.2-inch phone comes with a nice design. The glass back and metal frame house a sturdy but light device that feels great in the user’s hand. Thanks to the back, the Huawei Honor 8 can get slippery, so be careful and get a case. 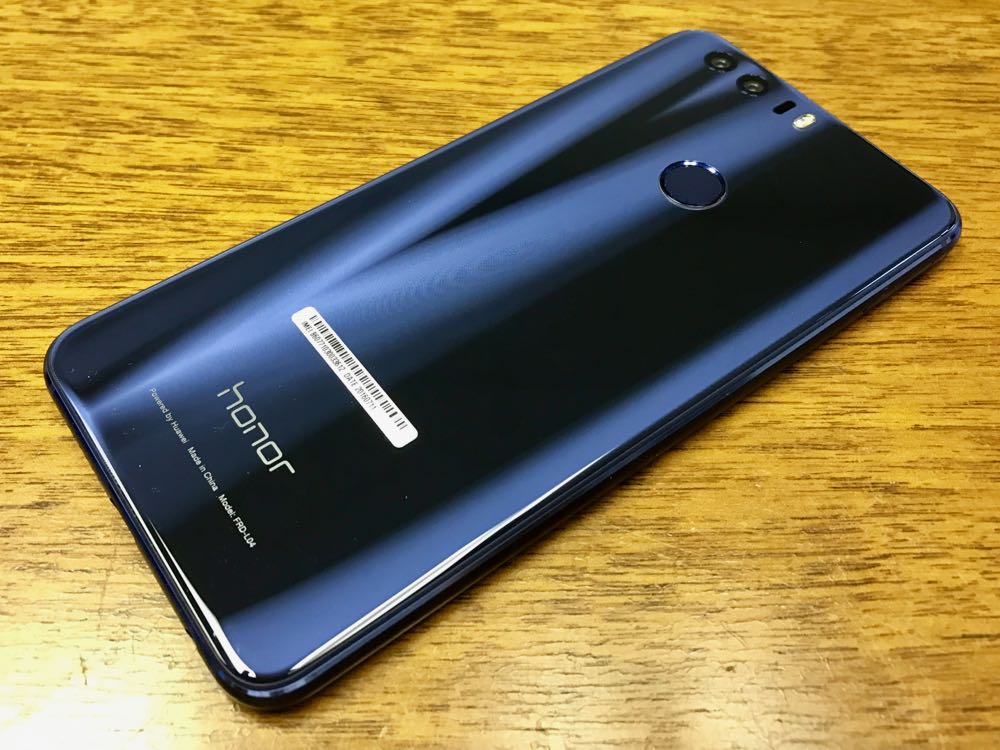 Our blue review unit looks cool on the back. The design reflects light and shows some interesting patterns. 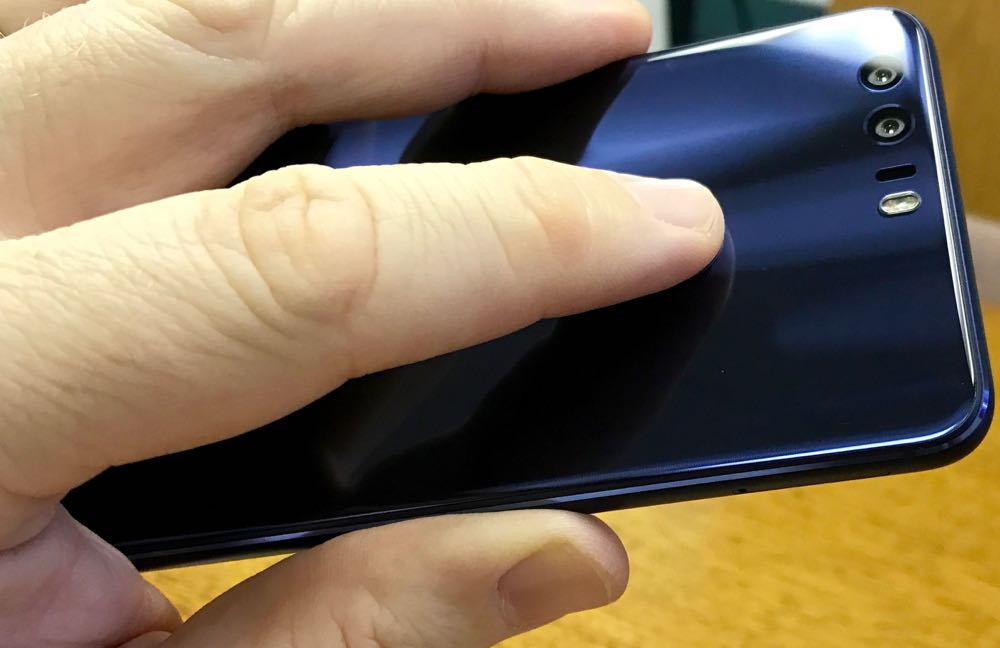 Speaking of the back, the fingerprint reader sits on the back. A lot of people love this design, but I’m not one of them. However, it works well and quickly unlocks the phone while not getting fooled by fingers not registered by the security software.

The phone’s double camera also sits on the back at the top left. More on the camera later. 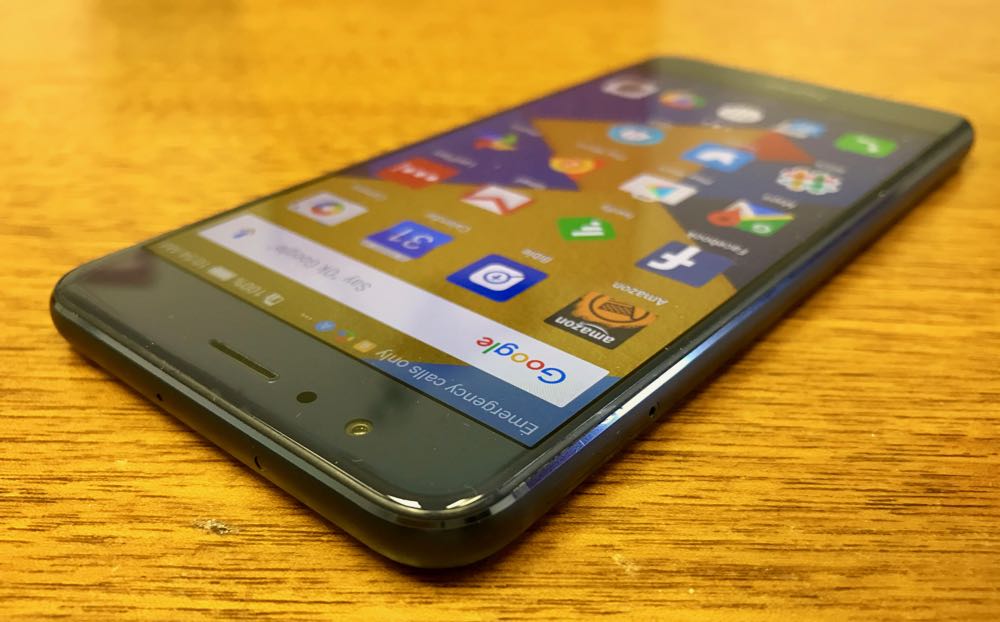 The metal edges feel smooth. They hold the mic along the top and the dual sim tray on the upper left which also can hold a single sim and a micro-SD card.

On the left side we see the volume keys at the top with the power button below that. 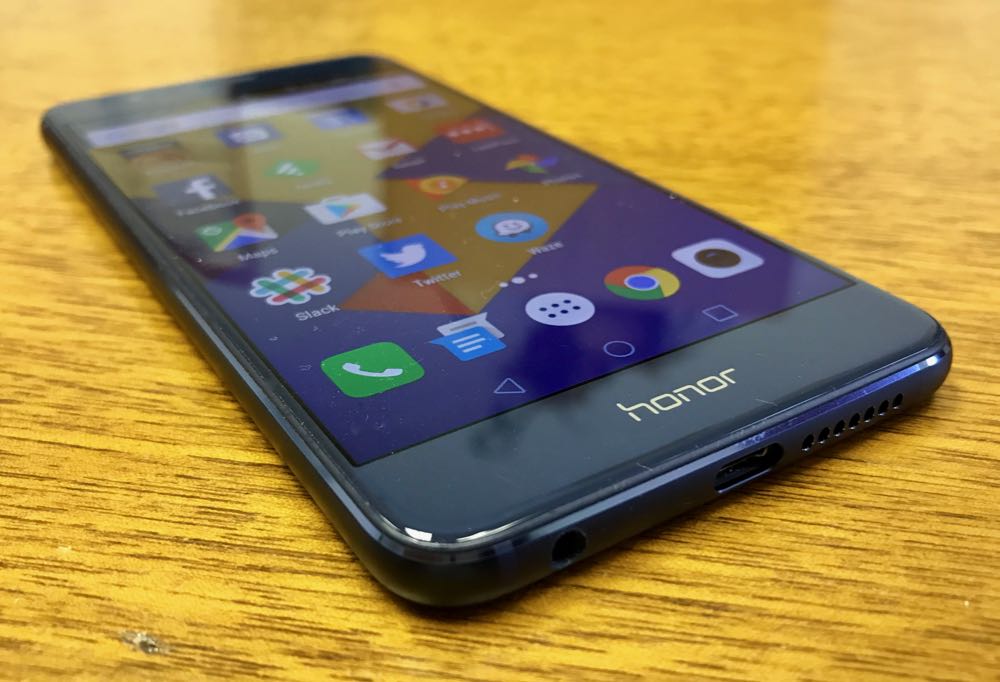 The bottom edge holds the headphone jack, a USB-C charging port and the phone’s speaker.

The Huawei Honor 8 feels like a well-constructed phone. The glass back will make it delicate if users drop it. However, in a decent case and with care this phone should hold up to the average user’s wear and tear. I accidentally dropped it a couple of times from short distances. It didn’t even scratch the corners and the back and screen stayed in tact.

The resolution on the Huawei Honor 8 is a little low compared to other phones like the Galaxy S7 or Note 7 and iPhone. However, it’s not bad. Colors look rich and bright and overall the screen is a plus, which begs the question: why not put in a screen with a better resolution. We’re guess that’s one way they hit the $400 mark. 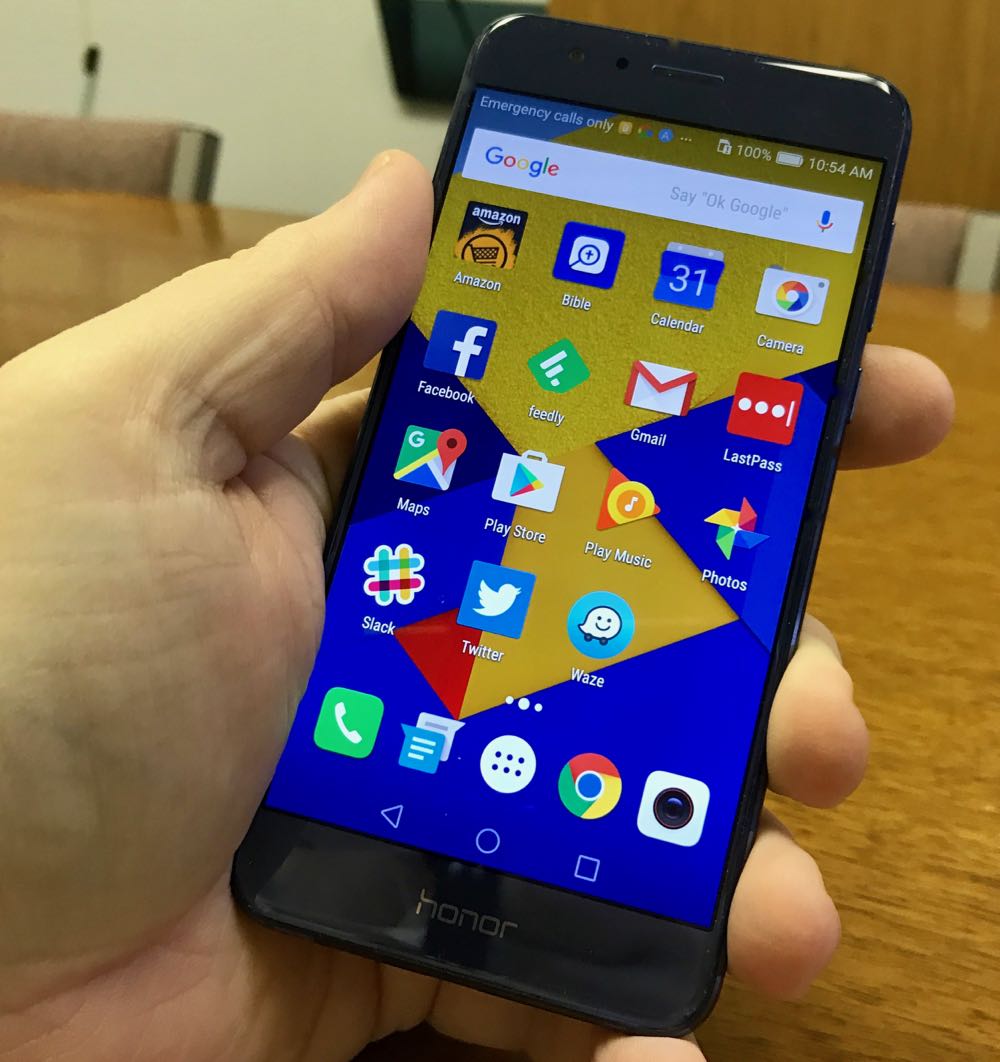 The color has a wide range from very bright to nearly dark when using the manual brightness slider. The screen shows a range of color with bright whites and dark blacks at the extreme ends. That’s why we put the screen on both our pluses and minuses lists above. 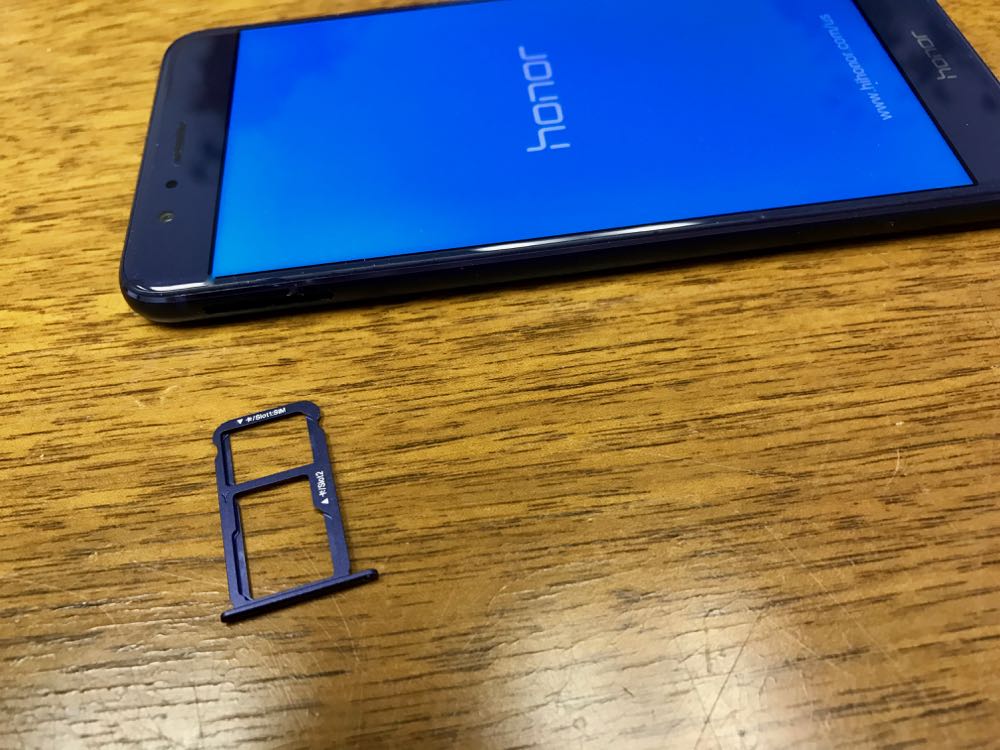 The phone runs on GSM, meaning it will only work on T-Mobile or AT&T’s networks. 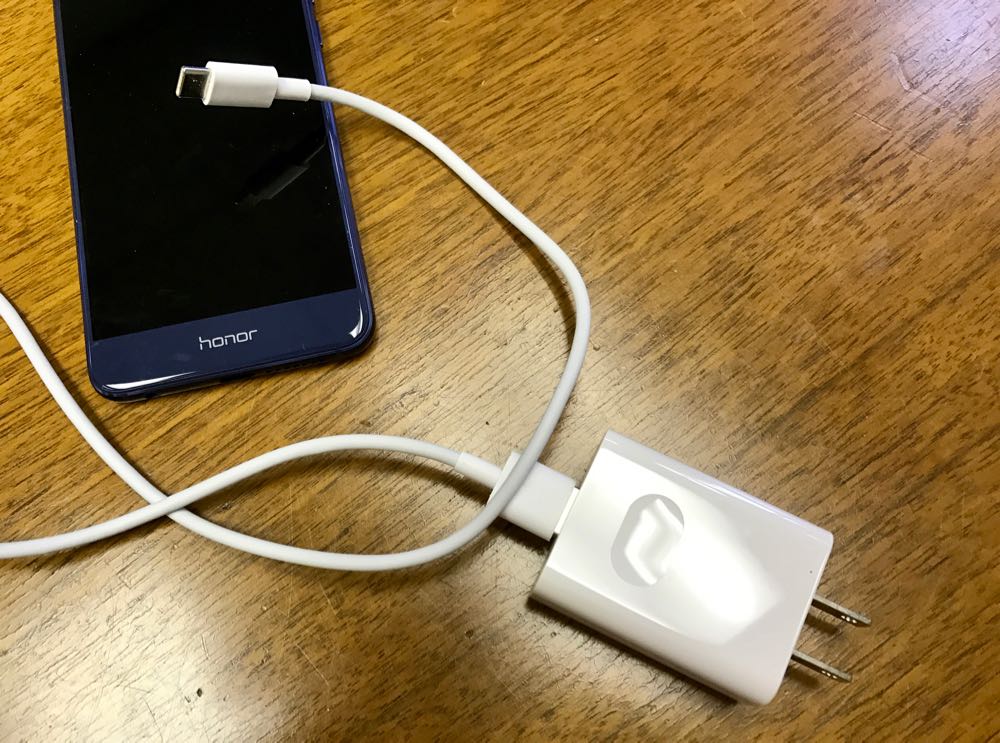 Other specs include a USB-C quick-charging port and 3.5mm headphone jack. The dual 12MP cameras on back join the 8MP front facing camera. The battery has 300mAh of power. There’s also an NFC chip. Add 802.11ac and Bluetooth 4.2. Of course, it also has GPS.

The phone feels like it runs smoothly and quickly most of the time. The apps pop up instantly and it wakes quickly when the user presses the fingerprint reader. The 4GB of RAM means users don’t have to worry about managing the number of apps running. 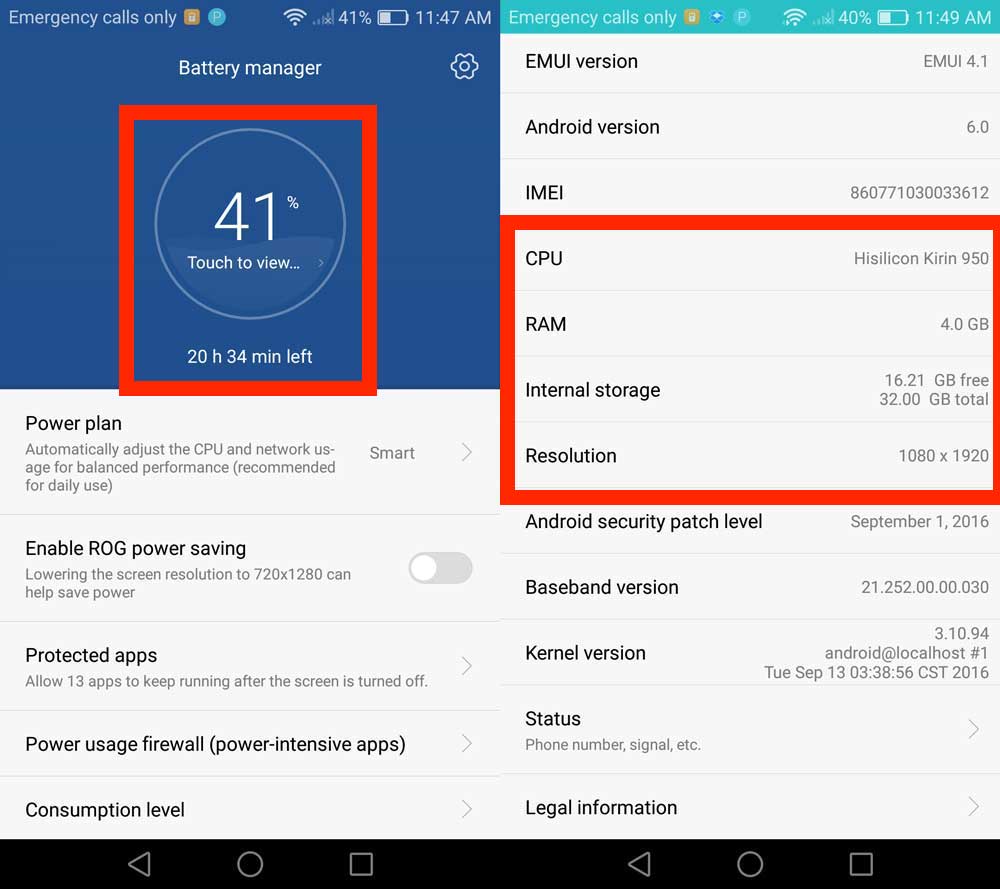 The GPU doesn’t make this a phone for gamers, but people who want a hardcore gaming phone won’t buy a budget phone like the Honor 8. Playing casual games like Candy Crush will work out fine on a phone like this.

The one area where the Huawei Honor 8 excels is battery life. Repeatedly, with a lot of use, the phone would always last for a full day and then well into a second day before needing a charge. The fast-charging USB-C port means that users don’t worry about battery life. On day two, plug it in at work and you’ll get another 36-40 hours. Often the phone easily lasted 2 full days.

The camera on the Huawei Honor 8 uses two lenses and pairs them to help shoot photos in varying light settings. One lens captures color while the second camera grabs only monochrome and measures the amount of light. The camera app combines the two shots to produce faithful color and handle low or bright lighting situations. Huawei promises 3 times the light over a single lens camera. 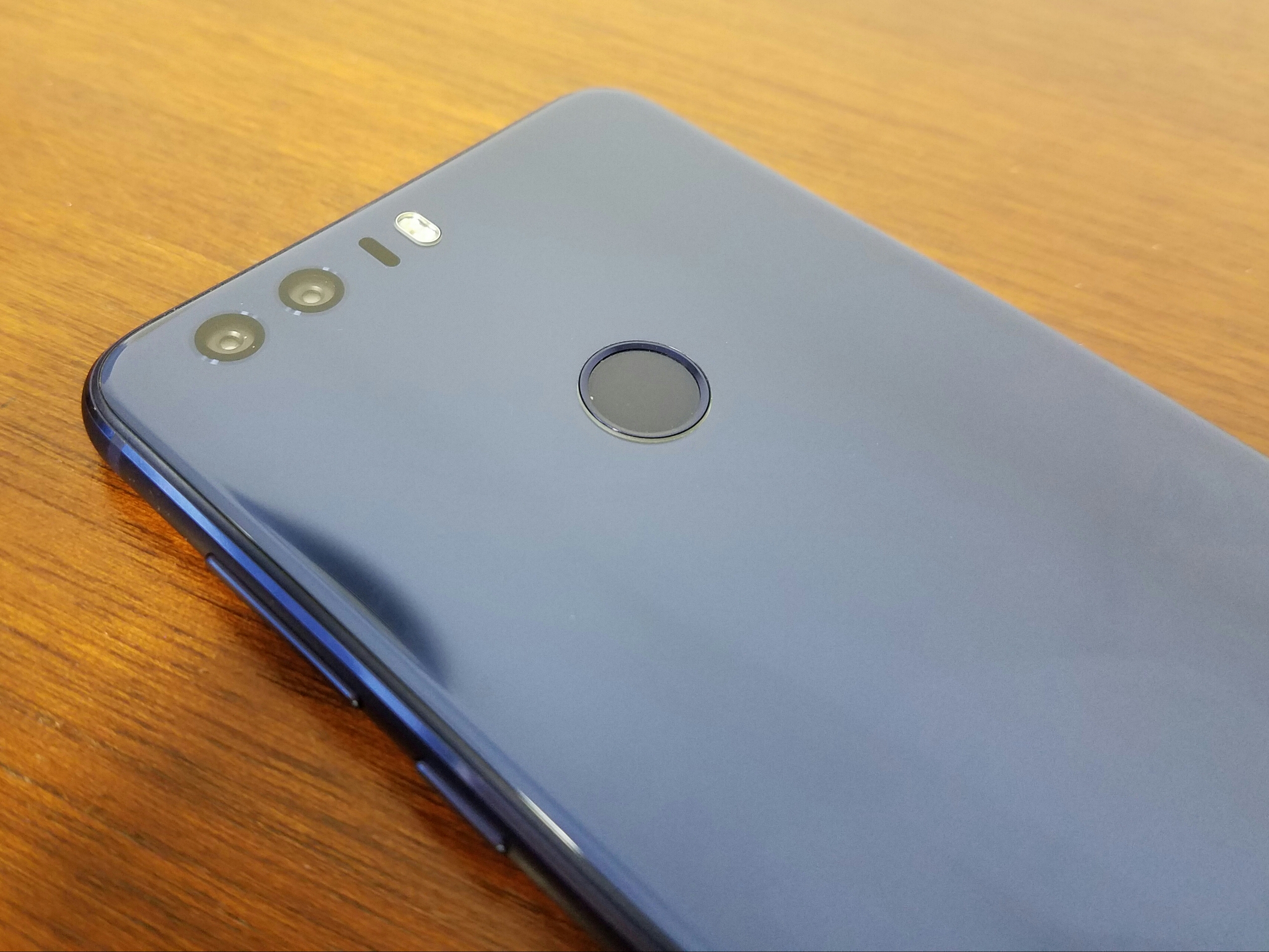 Launch the camera quickly by double tapping the back fingerprint button. It pops up quickly enough to get the shot. Most of the time, the shutter button takes the photo quickly. On rare occasions, it lagged slightly with nearly a second delay, but that only happened a couple of times.

The camera software presents a number of shooting options. Across the top of the app four buttons customize the experience:

The wide aperture button uses both lenses to get a fake bokeh effect with backgrounds blurred out, much like the iPhone 7 Plus camera. 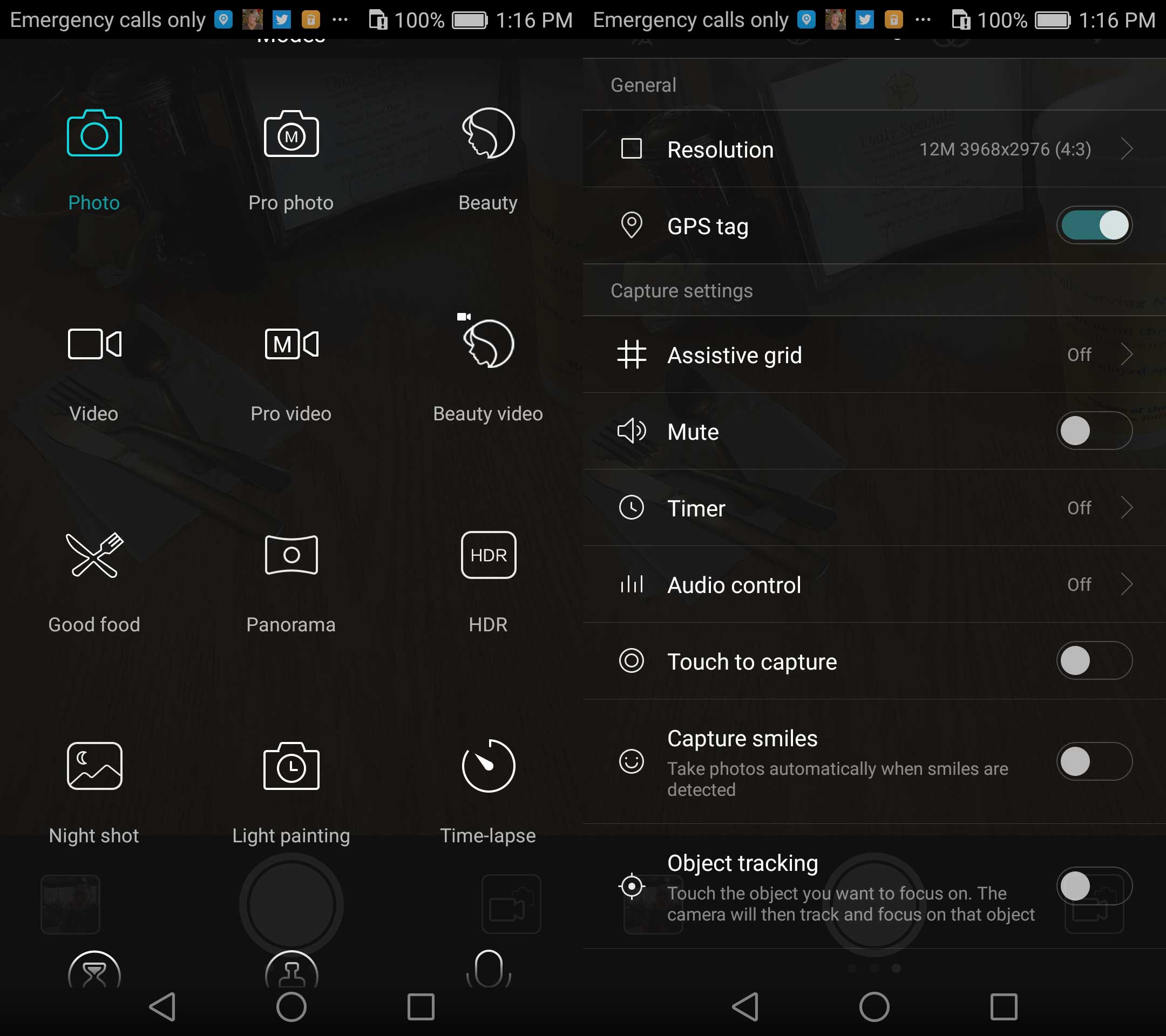 That’s quite a list and it makes for some interesting effects when using the Huawei Honor 8 camera.

Change the camera settings by swiping towards the left. Change the resolutions from 12M on the high-end to 6MP on the lower end. We also get choices between 16×9 and 4×3. There’s a nice feature that lets you double tap a volume button to quickly open the camera and take a shot.

The slideshow below shows a sampling of some photos from the Huawei Honor 8 Camera. 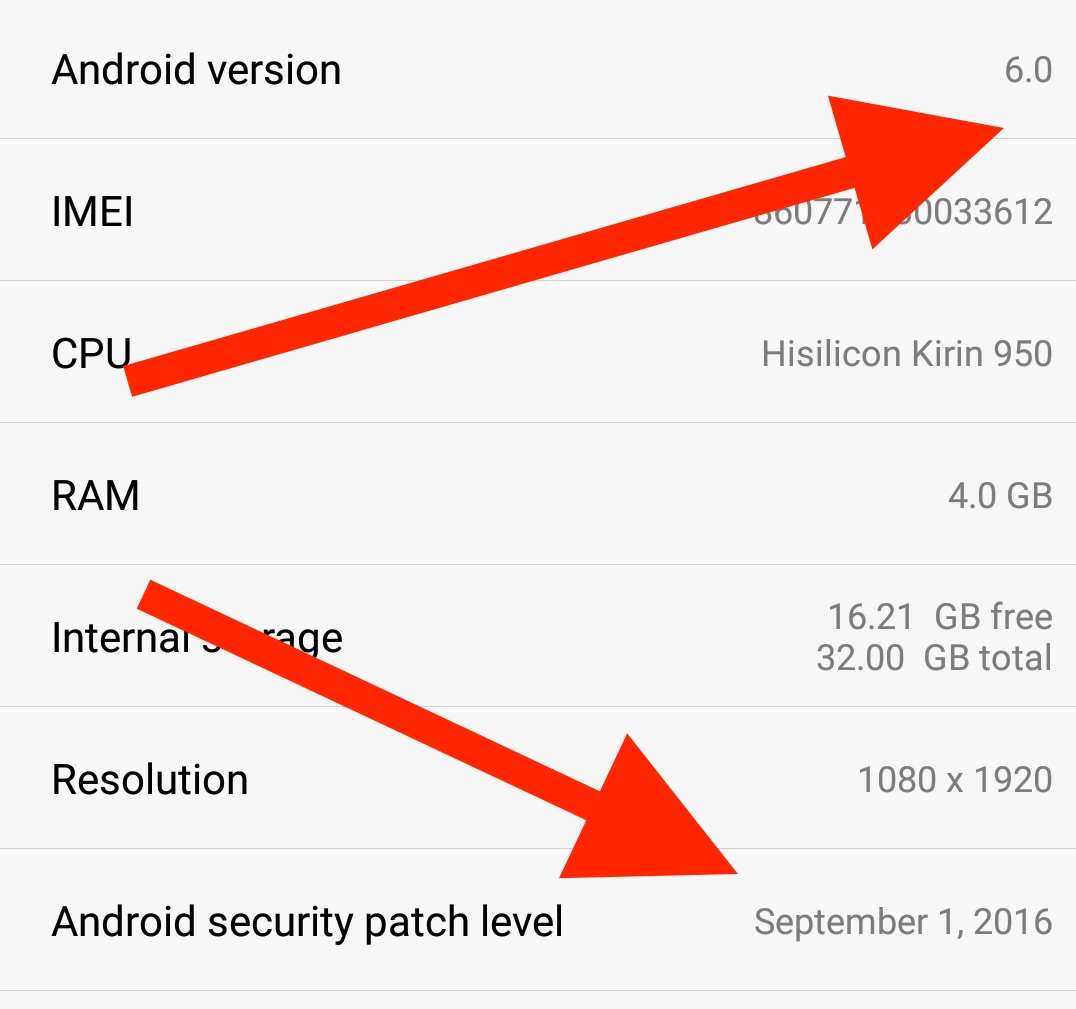 Unfortunately, the Huawei Honor 8 only runs Android 6.0, meaning it’s already 2 generations behind with the release of Android 7.0. The company doesn’t update their phones very quickly, so don’t expect the latest OS very soon, if ever. They did push out the most recent security software update. Since it comes directly from Huawei and doesn’t have to pass the slower carriers, we can hope to get those security updates monthly.

Also, Huawei’s EMUI custom software interface pales compared to stock Android or even the other big names like Samsung Galaxy’s Touchwiz. It gives users an iPhone style home screen, putting all of your apps on the home screen instead of an app drawer. 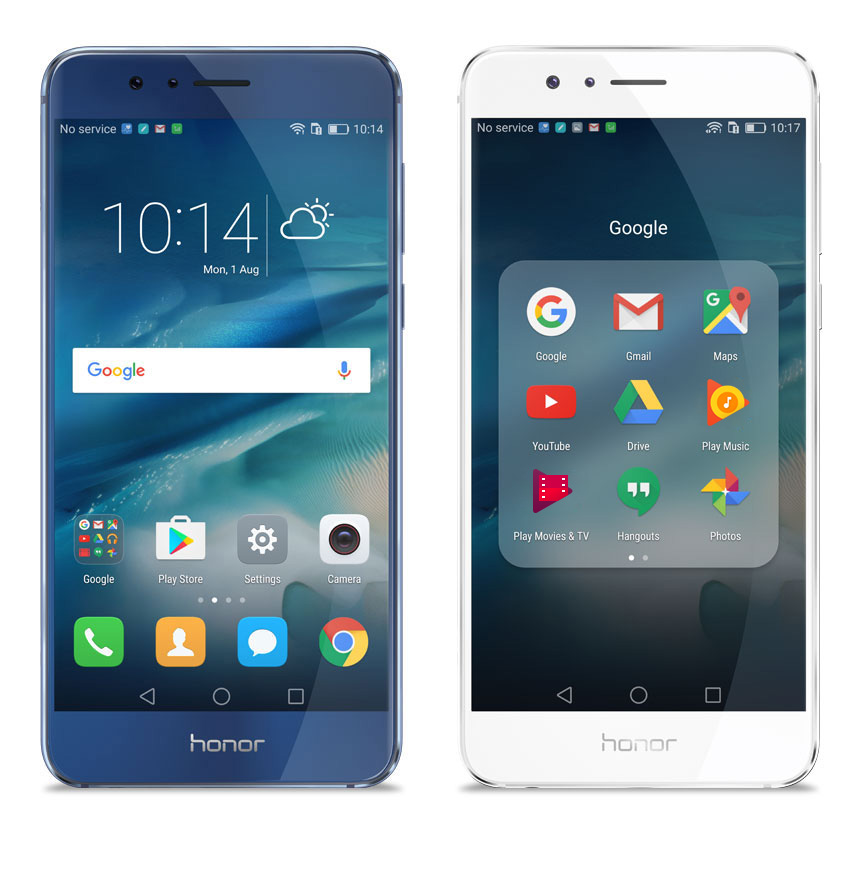 Pinch in to change the home screen settings, where you can control the icon grid. Use a 4×5, 5×4 or 5×5 grid of apps. It also includes multiple transitions animations between home screens.

Ignore Honor’s built-in apps for things like mail, calendar, browsing, and others. The phone also includes its own app store. I didn’t find anything interesting and preferred Google’s options or other third-party apps.

There’s a Standard style home screen and a simple one for people who aren’t too tech savvy. It gives users bigger tile icons instead of smaller app icons. This might make the Huawei Honor 8 a decent option for your parents or a family member that needs a smartphone but doesn’t want all the bells and whistles.

Is the Honor 8 Worth Buying?

The Huawei Honor 8 is a great device with a few compromises. That’s typical of modern smartphones. None of them can claim perfection. It’s a shame that Huawei has a reputation for not updating their phones to the latest operating system very quickly.

The phone enjoys a nice design, compact and attractive, even if it’s possibly delicate with the glass background. The phone’s fast CPU but slower GPU give mixed performance. It runs well for most tasks and lasts for a full two days on a single charge, but gamers will want a different phone. The USB-C charger tops off the battery quickly and helps make it relevant for a few years as most manufacturers ditch micro-USB for Type-C.

The software lets users down a little, except for the full-feature camera app. The camera produces decent snapshots even if its photos don’t look as good as the competition.

Win an Honor 8 from GottaBeMobile

Get the Huawei Honor 8 directly from Huawei for $399 or head over to Amazon where it’s on sale for the same price.