Ahead of the NBA 2K16 release date in late September, video game publisher 2KGames and developer Visual Concepts are detailing all the changes Xbox One, Xbox 360, PS3 and PS4 players can expect when the game arrives. Make no mistake, the changes to MyLeague & MyGM in the game are extensive.

The full scope of NBA 2K16 MyLeague & MyGM changes were detailed this week in a massive post on the 2K Games blog.

MyLeague Online is almost a new mode entirely. Visual Concepts revamped most of the experience. The developer is promising 30 teams for MyLeague Online with a mix of human teams and CPU teams if that’s necessary. Pre-season activities, things like summer leagues and fantasy drafts area completely upgraded. Players can customize how long their MyLeague seasons are and how difficult the competition gets. The updated mode also includes custom rosters and scheduling options so that MyLeague Online players can choose the best play time for their teams. 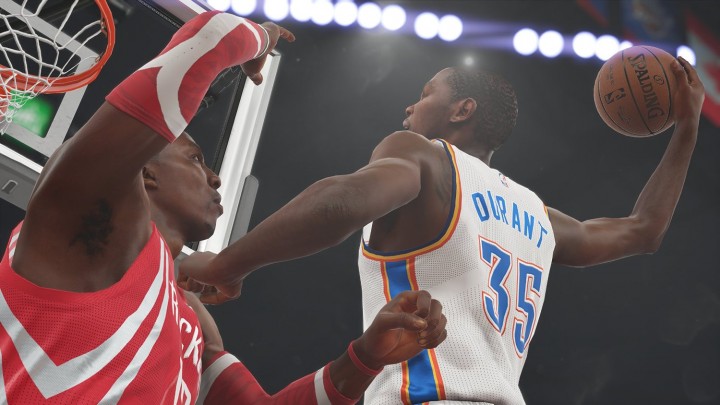 In NBA 2K16 any league created can be extended past one season with the same team changes and trades that the first season ended with. Additionally, they’re all invite only, leaving players to put together a league of reliable opponents and franchise makers instead of finding random people online.

MyLeague and MyGM both rely on users being willing to customize everything about their play experience. NBA 2K16 gives hardcore Players more options than ever. The Team Relocation system is a perfectly decent explanation of how deep this customization and simulation goes.

With approval, NBA 2K16 players can opt to move their favorite teams to different metropolitan areas. Successful moves involve balancing audience attendance, budgets, ratings and a few other factors. Ultimately owners can decide can decide whether to relocate their teams or not. Relocating takes cash, and NBA 2K16 players are going to have to bank money before any successful move. Team relocations are voted on by a committee and accepted only when the committee thinks the right pieces are in place for a successful move. To be clear, MyLeague skips all of these requirements, letting players do whatever they want. It’s up to users whether they save the latest happenings in their MyLeague sandbox or not. Visual Concepts has added an off-button for auto saves.

Moving a team in MyGM involves grants users all sorts of customization options. Visual Concepts maintains that all of these settings are optional, but for sure, most users will take advantage of many of them.

NBA 2K16 comes with different score logos, team logos, court advertising and more. Players can use that stuff or upload their own from the web. To match the new team branding, players can throw in new colors for every inch of their team’s home. Users can choose to add a scoring sound effect that plays whenever they score, but for now that feature relies entirely on what’s included in the game. Additionally, MyGM forces players to think about the entire basketball experience.

Adding high-wealth boxes and other amenities to each stadium makes it more likely that teams will be successful. NBA 2K16 MyGM will have 13 different arena styles with options for different baskets, scoring tables, jumbotrons, floors, names and baselines. Stadiums will need parking garages, merchandising stands and restaurants. Public transportation to the stadium is included in the list of upgrades too. Even free stadium Wi-Fi is an option.

Move a team and the NBA 2K16 Team realignment system kicks in. This system keeps everything balanced, assigning teams to different divisions within the granular league.

Maintaining a staff and decent roster require attention in NBA 2K16. Rejecting trades come with a reason why the trade was rejected. Coaching staff can be poached by other teams too. A ticker and intel screen keep players abreast of the latest league news and information. Three way trades are back too.

All told, MyLeague and MyTeam are at their peak in NBA 2K16, giving users another reason to continue playing long after they’ve finished up in the dedicated MyCareer campaign mode written and directed by Spike Lee.

The NBA 2K16 release date is September 29th, but users who pre-order get access days earlier.