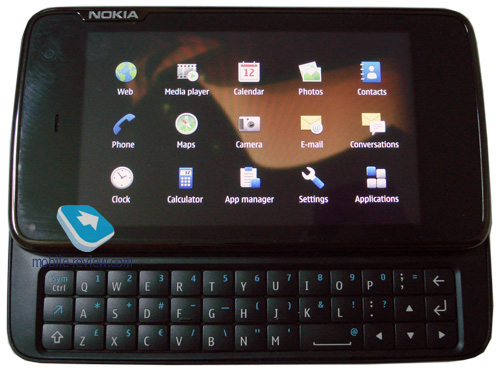 “This article is nothing but our first impressions of the device and some musings about what’s going to happen.” — That’s the first sentence in the write-up at Mobile-review.com, preparing the reader for their preview of the Nokia N900 / RX-51. Like I commented to Rob when he left us his “few” parting thoughts, I’ve seen “some” musings before. Skimming this article was not one of those times.

It starts with a very brief intro before rolling into a reflection on the rise of Internet tablets (which takes up about half the write-up) and then details about the hardware and software, which includes lots and lots of photos. They have more screenshots than I’ve taken from my iPhone after a year. I’ve taken the liberty of rounding up some bullet points.

It’s running Maemo as the OS, same as Nokia’s previous Internet tablets. They claim this is the successor to the N97, but the naming implies it’s to replace the N810 (and that’s what we’ve assumed from previous reports), though I guess there’s no reason it can’t be the replacement for both. Key impression of the user experience:

Due to variety of visual effects, smooth transitions and decent reaction time of the touch screen (which is a significant improvement over the Nokia N97), the N900 feels more like the Apple iPhone. At the same time its UI looks nothing like that of the iPhone – it’s just different, but eye-candy nonetheless (maybe somewhat similar to HTC’s products).

The screenshots seem to support that, except all but one of the screenshots is horizontal/landscape. Gives me a good feel for the tablet experience, but not the phone experience. The oversight is a tad disappointing given the otherwise extensive preview. Be sure to block off some time before you check it out for yourself.