A shocking new Surface Pro 3 deal available today shoppers can save nearly half off the price of Microsoft’s flagship tablet that can replace a notebook PC and even a desktop. This savings is ahead of next week’s rumored Surface Pro 4 announcement.

Online retailer Newegg began offering the Surface Pro 3 deal in question this week. The savings isn’t available on the Newegg website, but on Ebay. Shoppers can look forward to $370 in savings on the entry-level Surface Pro 3. 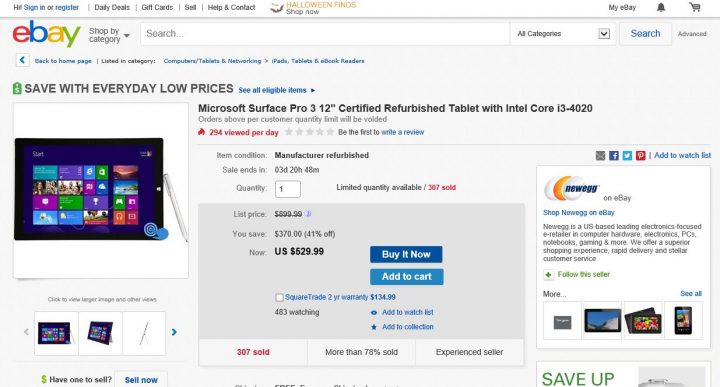 Newegg says that devices were refurbished by Microsoft and were “repaired to meet manufacturer specifications.” Though used, these devices are in “excellent condition” according to the listing which was last updated this morning. Newegg is offering free shipping with this Surface Pro 3 deal, though users should probably look into expedited shipping instead. Newegg’s standard shipping takes 15 days in the continental United States.

The Surface Pro 3 is generally considered the most successful 2-in-1 to date. In fact it’s so successful that Apple seems to have blatantly copied it for the Apple iPad Pro. Google appears to have been inspired by the Surface Pro 3 too. It’s Pixel C tablet has a Bluetooth keyboard for letting users state productive too. This Surface Pro 3 deal is terrific; but it may be a better idea to wait until next week.

Rumors indicate that Microsoft is preparing to replace the Surface Pro 3 with a Surface Pro 4 very soon. Allegedly, there will be a Surface Pro 4 that matches the screen-size of the Surface Pro 3 and another that has an even bigger display. Rumored internals include Intel Skylake processors that are more energy efficient and create less heat than their predecessors. Intel showed off a machine powered by Skylake that lets users start their PC with just a voice command. It’s almost a sure thing that Microsoft will add a sensor that lets Surface Pro 4 users login without typing in their passcode. If Microsoft does announce a surface with a bigger screen.

Pricing on either of these rumored Surface Pro 4 devices remains elusive right now. Microsoft has a Windows 10 devices event planned for October 6th. Allegedly, a new Microsoft Band wearable to compete with the Apple Watch and two new Windows Phones to compete with the iPhone 6s and iPhone 6s Plus. These iPhone 6s rivals are called the Lumia 950 and the Lumia 950 XL. Microsoft has already leaked both devices entirely, making them a sure thing at next week’s event.

Microsoft will broadcast its Windows 10 devices event online at its website.