Hugo Ortega has posted some more close ups of the Origami device and claims that they come from a very reliable source. Irregardless, they look really interesting, especially the close ups of the buttons, etc. Click here to see more photos.

And, here is the most interesting part, Hugo goes on to claim that the Origami device will be availble soon in Australia and even has a teaser and picture on his reseller website  (which has now been removed – but trust me – it was there ) touting the Origami and a picture of the device as featured on Engadget. What is really interesting is that Hugo is a reseller of TabletKiosk’s tablet pcs in Australia. Does that mean that the device shown is a TabletKiosk product? I honestly don’t know,  but if you put two and two together .

Could those be Hugo’s hands?

I talked to Hugo tonight via Skype – he couldn’t confirm the TabletKiosk bit or who is holding it, but he does confirm that the photos are real.

1. the obvious picture on the homepage of tegatech (  – now removed )
2. the contact page on their site lists origami as a select option.

Update: the following pictures (except for the last one) has been removed from Hugo Ortegas site. 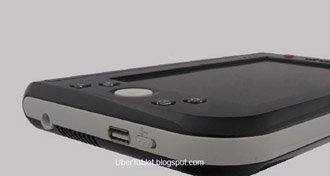