If your device doesn’t fall under Hulu’s agreements with studios, there is generally no soup for you. Translation: Hulu’s website is blocked on most tablets, and when you head to its website, you are greeted by a black screen that informs you that your platform is not supported. You get an apology for the inconvenience if that is any sort of consolation.

Well, it seems that the HP TouchPad and its webOS platform had not fallen under the ‘not supported’ umbrella, that is, until today when it was discovered that Hulu had gone ahead and blocked the device from accessing the site. If you head there on your new TouchPad, all you’re going to see is the black screen telling you that you’re not welcome. 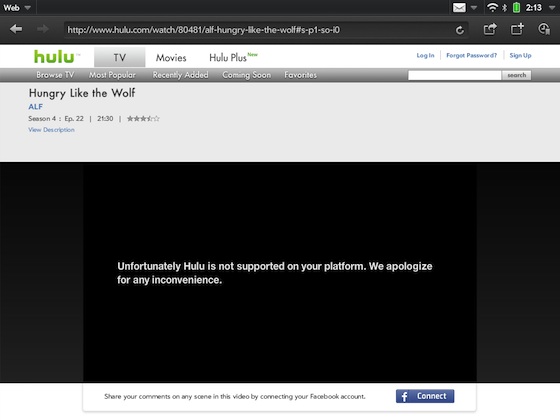 And for those of you still waiting on a TouchPad, you’re just left knowing that you won’t be able to access the site.  Right now, if you want to access Hulu, you’ll need a Vizio 8 tablet or an iPad.

Oh, well. It was only a matter of time before Hulu took notice. After all, the HP TouchPad is selling for a mere $99 and is more popular than ever now that HP has effectively killed it.