Apple may be looking to more aggressively tackle Amazon and the e-reader market with its latest patent filing for a hybrid display system that can dynamically switch between an e-ink display and an LCD display depending on the application used.

The Apple system would, like its graphics options on computers, not require the intervention of users to switch between e-ink or LCD. Rather, the switch may be dependent upon the application. 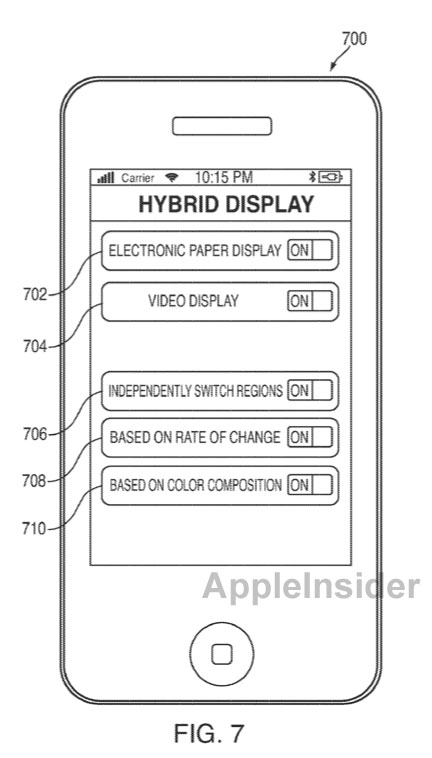 E-ink, which is used in the Barnes & Noble Nook, Amazon Kindle, and Sony Reader, is seen as advantageous for e-book reading as it is not backlit, works beautifully under direct sunlight, and doesn’t cause fatigue. Additionally, when used for e-reading, the e-ink displays also offer better battery life with the Kindle boasting up to 3 weeks between re-charges. However, as the refresh rates of e-ink is slow, the display is not suited for video, and colors appear to be washed out on color e-ink panels, which have yet to see a release in a commercial product.

LCD, which consumes more battery and is less ideal under sunlight, offers better color and video experiences. It is due to LCD’s poor performance under direct sunlight that spurred Amazon to run a number of ads comparing the Kindle to the iPad and poking fun at the poor sunlight performance of the Apple tablet as an e-reader. 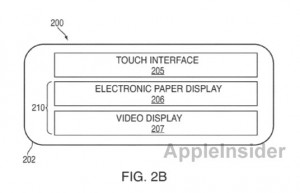 The patent, titled “Systems and Methods for Switching Between an Electronic Paper Display and a Video Display,” shows that Apple hopes to utilize a hybrid state where applications can use both the LCD and e-ink mode at the same time for certain apps.

One such application where this technology could shine is in interactive or enhanced e-books, where e-books are augmented with videos, photos, and rich content. The e-book portion, which is text-based, could still be powered by the e-ink display technology while the video and multimedia portion would be shown using LCD technology.

To accomplish this, Apple could overlay a translucent e-ink display on top of an LCD or OLED display on a device like the iPhone or iPad. In this mode, there would be independent backlights for the LCD and for the e-ink portion.

The patent was originally filed in 2009. As with Apple patents, Apple could be researching technologies and applications that may not see a commercial release.

Since the Kindle was released, there have been other types of display technologies that aim to meld the best features of LCD and e-ink together, offering a good multimedia experience while offering screen readability under direct sunlight. Some of those technologies include Qualcomm’s Mirasol display and the Pixel Qi technology found on select Notion Ink Adam tablets.