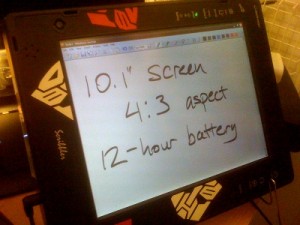 Lack of active pen input keeps me from getting too excited about the iPad, but the design has me feeling nostalgic. Roughly 10″ screen, 4:3 aspect ratio, (allegedly) all-day battery life, pure slate. Five years ago, I was lured into tablet computing by a Tablet PC with these very traits.

Behold, the Electrovaya Scribbler SC-500. Five years ago, this four pound brick was my introduction to the Tablet PC. Bought refurbished from Electrovaya via eBay, I put it to the mobile test not long after purchasing on a trip to Japan, starting me on the path to ink blogging. Running Windows XP on its 833MHz Intel P3 processor with 512MB memory sounds ridiculous by today’s standards, but I found it quite speedy at the time.

On the surface, the iPad has much in common with my Scribbler. Both have roughly the same footprint and screen size. Display resolution for both is 1024×768, 4:3 aspect. In terms of working surface, it’s practically identical. I loved it then, so I can’t very well turn around and hate it now.

The notable physical differences are the weight and thickness. At 0.5″ and 1.5 pounds, the iPad is less than half the thickness and weight of my Scribbler. Can’t express how much a thinner, lighter slate would have improved my tablet experience. Despite that, it still clocks in with comparable (promised) battery life with only 25 Whrs vs. the 140 Whrs in my Scribbler, showing the energy efficiency of the A4 processor.

Factor in the other tech improvements and its tailored interface, and the iPad shapes up to be a sleeker, faster version of my Scribbler. Lack of active pen input keeps me from embracing it for myself, but design-wise, I can’t not love it.