Well, you know I was doing the Android to Windows Phone 7 conversion a couple of weeks ago, right? It went well and I found that Windows Phone could be used as my “Daily Driver”. I decided to go with a swapping back and forth between the Samsung Galaxy S II Skyrocket and the HTC Titan. That went well for about a week. When I used the Skyrocket, I missed things about the Windows Phone 7. When I used the HTC Titan, I missed things about Android. I was all set to go back and forth. Something happened to change all that though. I changed my wireless carrier.

I am not going to discuss why I changed carriers, but I can tell you all certainty that it was not to purchase the Galaxy Nexus. Sure, it’s what I ended up with after a week with the Droid RAZR, but it’s not why I moved. 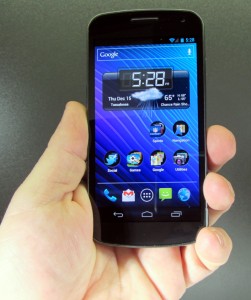 The downside to switching to Verizon is that I am left with no modern Windows Phone 7 device to hot swap back and forth with. This is something I didn’t think through. They do have the HTC Trophy, but until Microsoft can deliver LTE support, Verizon is not buying (or selling). Verizon did make a public statement not too long ago basically telling everyone that Microsoft and LTE is what’s holding up their Windows Phone support. Until then, I guess I will hunt for a HTC Trophy as my backup.

Why do I even need a Windows Phone backup? Well, I do have the Samsung Focus and HTC Titan, but I need a live device. I have an iPhone 4 at my disposal for testing, I have the Galaxy Nexus now, and I need a live Verizon Windows Phone 7 device to round out my coverage of apps, tips, and tricks here at GottaBeMobile. I need and want to cover all 3 platforms to keep my platform agnostic badge. I will admit, getting set up for coverage has taken longer than I thought, but I promise to be a functional member of the GBM Staff soon!

So, Android 4 aka Ice Cream Sandwich on the Galaxy Nexus for now!

Make sure to check out our Galaxy Nexus review, my initial impressions, and my 10 Tips and Tricks for the Galaxy Nexus.