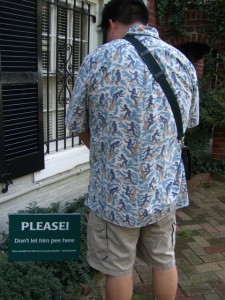 Sorry if this seems a tad delayed. I meant to write this up last night, but you know, something more urgent came up. Also, let me make clear, I’m not against either view of the iPad, nor am I in the iPad-hating crowd (I’m usually accused of being the opposite). The iPad has a purpose. It is useful. It would fill several of my needs as well. I just already have things to fill those needs.

Mobile computing: even before my recent spate of upgrades, my mobile computing needs were filled by my Tablet PC. They don’t match the battery life or lightness of the iPad, but I’m usually more nomadic than mobile. Like today, I was in a meeting for an hour taking notes, but now I’m back at my desk until lunch. I need mobility in spurts, not all-day, and I also need full computing power when I’m not mobile. In this area, the iPad offers more mobility than I need but not enough computing punch.

Full mobility: When I need to go fully mobile, I have my iPhone. It does more than the iPad but on a smaller screen. Unlike the iPad or Tablet PC, the iPhone is a one-handed device, at least the way I use it. My one-thumb style allows me to perform most tasks while holding it in one hand. From Warner’s list, it covers stall surfing, lunch time, feed reading, and email (to the point that most of my personal email goes through it). The iPad simply does not offer me any advantage on this front.

Pen input: I am a pen addict. I don’t hate touch (though I hate when it’s poorly implemented), but after years of using active pen input on Tablet PCs, I’m so well trained with pen that anything less is clumsy by comparison (pen + touch is more).

Web browsing: While the iPad delivers a fine web browsing experience for most people, it’s a big step backwards for me. As I demonstrated in my Shortcut on small-screen touch optimized Firefox, I’m big on gesture control for web browsing. What I showed with touch-only is kid’s stuff compared to what I do with pen + touch, which combines multi-touch gestures, precision pen control, and handwritten shortcuts via ritePen. Remind me to do a Shortcut on that some time.

So I could slice it out thinner, but basically, any needs the iPad would fill are already met by my existing gear, much as Chris has found firsthand. Had I not already spent five six (ugh, I’m old) years tweaking Tablet PCs to fill some of those needs and not already owned an iPhone, I’d snap up an iPad and use it just like Warner. Really, I’m on board with both their views on the iPad. At the same time, being iPad-less, I’m not in the same boat as either. Am I alone?