Yes, I have finally purchased a major Apple product. Just last week, I made a comment here on GBM that made me feel better about my choice. I said, “Can I buy Apple products but think Jobs is a pompous jackass? Sure.” Little did I know that I would actually do it. I have purchased  a handful of iPhones, iPods, and even a iPad, but never a desktop or laptop. I just felt that was going over the line. With the iPhones and iPods that I purchased, I could use the excuse that it was for testing for my website. This was true in most cases and proportionally, I have spent way more green on non-Apple products than I have on Apple products. 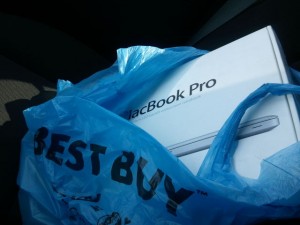 So here’s the story. The MacBook Air 11 was launched last week. The size had me excited and thinking that I might buy my 1st Mac OS laptop soon. I built one in the online store and was ready to pull the trigger and then I backed out and decided to think about it a little. Later that evening, I decided not to but one.

Friday, I saw some reviews online of the iMovie experience and since I always envied the ease of throwing together a really nice video with it, I was interested in seeing what it could do. I was impressed with what I read and thought about setting up some Mac love in a virtual machine on my desktop PC to try it out. I never got around to looking into that and headed to bed.

On Saturday morning, I had some errands to run and one of them was to grab a couple things from Best Buy. Well, they had their new MacBook Air on display and I figured I would check it out 1st hand and had decided that I might still purchase one. With my “I’m a PC” shirt from Microsoft on, I walked up and gave it a spin. I was impressed with the size for sure, but I looked at the price and couldn’t help thinking that it wasn’t really worth it. I started toying around with the 15″ and 13″ MacBook Pro demo units and walked away. I did like them all, especially the actual hardware.

I was checking out DVDs and was thinking about how my daughter was going to be a freshman at the University of Alabama this fall and that she would need a new laptop for that. Using that logic, I talked myself into grabbing a MacBook something. I could give her my 5 month old Sony Vaio, which is a pretty nice laptop itself and I could get a MacBook Something for myself. I could run bootcamp on it and not miss a beat.

I headed back over to the MacBooks and decided that the 15″ MacBook Pro would be my best bet. $1999 for a laptop though, wow! Based purely on price, I decided to give a little more attention to the 13″ MacBook Pro. It was only $1199 and much closer to my expected spending allowance. Out of curiosity, I asked the salesman if they had any open box deals and he said they actually did. I asked how much and he said he wasn’t sure. He went to the back and came out with a box. I got out the door with the MacBook Pro 13 and a Magic mouse for less than retail, including taxes.

I have never used a Mac in modern days so my day of on/off playing around has been full of, “How in the &*&# do I do this” thoughts. I am figuring it out quickly and I am still deciding if I want to run the Mac OS or Windows 7 on it. For what I use a laptop for, I think I could do fine either way.

In the end, a Microsoft fanboy has really gone off the deep end this past weekend. Will I become an iPerson? Probably not. Will I give it a chance? Yes, for sure.

On Sunday, I loaded it down with a good amount of apps to give it an at home feeling. I still don’t totally feel at home, but I put some training wheels on the MacBook. I installed VM Ware and threw a Windows 7 Ultimate install on there.