In case you missed it, some dude got his hands on a prototype of the mythic HP Slate and put it on YouTube. In his straightforward overview of the exterior, he points out the Ctrl-Alt-Del button, a standard feature on real Tablet PCs. Ridicule by commenters everywhere ensued. Well, almost everywhere.

In a prime example of how my life works, after going almost my entire Tablet PC-equipped life without mentioning it, I sang the praises of the Ctrl-Alt-Del button twice this month. First, I suggested it be included on ViewSonic’s ViewPad 10. Then I commended Hugo Ortega for actually doing it with his TEGA V2. And now the idea of such a button is the most ridiculous, FAIL-ridden thing some people have ever seen, presumably because they don’t know what it does. 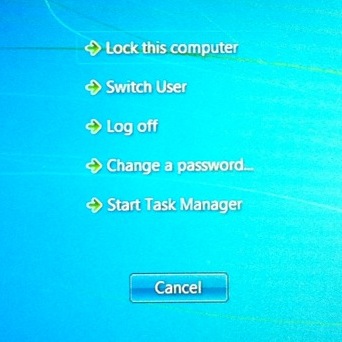 See this photo? This is what you get on the screen on a Windows 7 tablet after you press the Ctrl-Alt-Del button. You can lock the computer, switch the user, log off, change the password, or start the Task Manager. Not seeing the ridiculous part here.

Yes, the button is a failsafe to get to the task manager if the system freezes. However, all desktop operating systems offer equivalent ways to unfreeze the system. The difference is you can’t use an on-screen keyboard for Ctrl-Alt-Del when the system’s frozen. Hence the need for a hard button.

Mock the Ctrl-Alt-Del button if you must, but it’s been a standard part of Windows-based tablets for nine years (It’s in the Wikipedia entry), and it’s not like Android and iOS never get frozen.