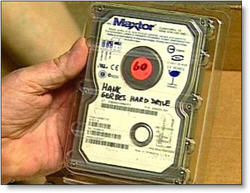 This is a issue which affects us all.  If you have never had a hard drive crash, you will.  In this case, the crashed drive was repaired (well, actually replaced) at a Best Buy store.  Nothing wrong with that, but the end result was that this man’s hard drive showed up a a flea market 6 months later.  Check this out:

“One year ago, Hank Gerbus had his hard drive replaced at a Best Buy store in Cincinnati. Six months ago, he received one of the most disturbing phone calls of his life. “Mr. Gerbus,” Gerbus recalls a stranger named Ed telling him. “I just bought your hard drive in Chicago.” Gerbus, a 77-year-old retiree, was alarmed. He knew the old hard drive was loaded with his personal information — his Social Security number, account numbers and details of his retirement investments. But that’s not all. The computer also included data on his wife, Gena, and their children and grandchildren, including some of their Social Security numbers. In June 2005, when Gerbus took his computer to Best Buy for repairs after a hard drive crash, he knew the drive was a potential hot potato. So when a clerk there told him it had to be replaced, he asked for the damaged hardware back…..

….. Ed told Mr. Gerbus he’d purchased the drive at a flea market for $25, Hank Gerbus recalls. The two made arrangements to return the hardware to its rightful owner. But Gerbus has no idea who else might have seen the personal information in the interim. “From June (2005) to January, I don’t know where it was,” he said. “That’s why I am so concerned.”

Very, very, scary.  It’s made me think back to my own practices in disposing of hard drives and equipment as well.  What’s the answer here folks?  Do we get the drill out and handle this ourselves?  Not if you are under warranty.

Be careful out there.  Oh, and thank goodness for good people like “Ed”, who will do the honest thing.  Thanks Ed.