I’ve tested rugged cases and battery backup cases, but seldom do manufacturers offer both in one package.

The ibattz Mojo Armor Removable Battery Case offers that combination in an impressive case that gives the user a very long battery backup, thanks to not just one, but two removable batteries.

Buy one case and get two options. One for a hard day’s work in a rugged environment and one for a more stylish alternative.

The ibattz Mojo Armor Removable Battery Case consists of a battery case with a 1700 mAh battery backup that the user can replace with the second battery, also included in the package. A thin plastic back covers battery compartment on the rear of the case.

Two Cases in One

The user can choose to install a rugged plastic exoskeleton over the battery backing that protects the edges and front of the iPhone with a shock-resistant frame. A silicon covering hides most of the skeleton making it more comfortable to hold. A thin clear covering protects the screen and allows the user to touch the display. 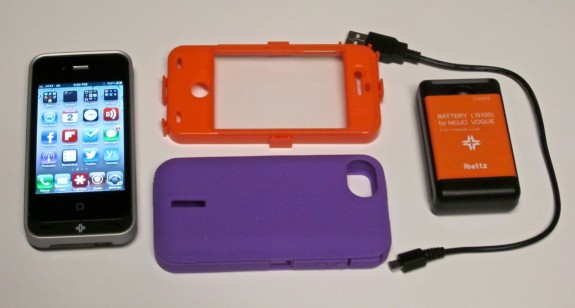 The second option pairs the battery backing with a grey plastic band that only covers the edges of the iPhone. It reminds me of the Apple band that came out with the iPhone 4, except the ibattz band is plastic instead of rubber. It’s less protective and more attractive. The user chooses between a more elegant black and gray case or the more protective purple and orange. 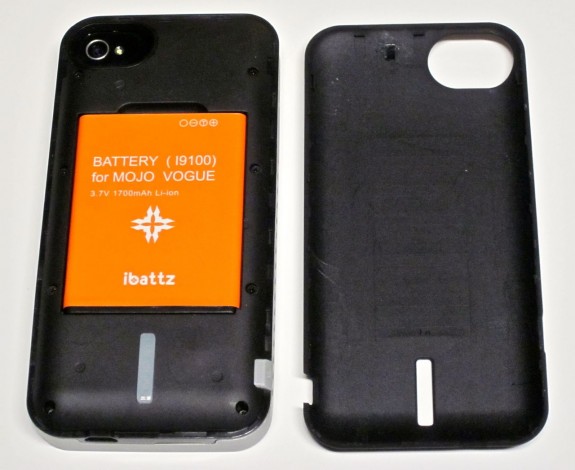 ibattz mojo armor case with back off showing removable battery

The ibattz Mojo Armor Removable Battery Case comes with two batteries and an extra charger with USB syncing and charging cable. Charge the second battery while using the first until it dies. Then swap batteries. I could use the two batteries so I never have to plug the phone into a charger, ever.

Our charger failed. It wouldn’t charge the batteries no matter what we did. ibattz sent us a replacement which works fine. With all the reviews we do we’re bound to get a bad unit from time to time.

If I want to plug into my computer with the included USB to micro-USB, then the phone will both charge and sync to iTunes. I like that I can use a micro-USB cable since I own so many of them. If someone owns mostly iOS 30-pin dock connectors, then this could cause problems. 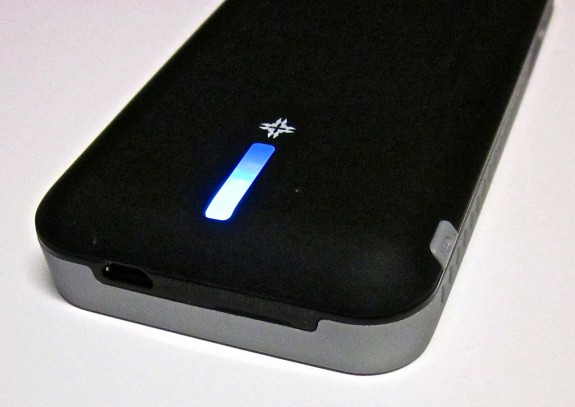 The case charges via micro-USB. This shows the LED which lights up when the user presses the battery button.

At first I didn’t like the Mojo Armor case. The rugged purple and orange cover isn’t my favorite color pairing and I don’t like the feeling of silicone cases. For those who don’t mind the color or feel, the case works great and protects the phone well. The orange and purple rugged case comes off only when you want it to, but at that time it comes off easier than the gray band. I had a lot of trouble removing the gray band. The thin back only comes off with a lot of force.

The iPhone offers a 1420 mAh battery. Two 1700 mAh batteries triples the battery life. In my experience that means anywhere from two to three days of use depending on how much power I need. I left the screen on most of the time and it lasted about 48 hours. I charged both batteries to 100% and then drained the first one, replaced it and then drained the second before the internal battery began to drain.

On the back of the case sits an LED that will blink as the battery charges and then turns solid when it’s topped off. The five lights give you an idea of how much power the case’s battery still holds, with each representing 20% battery life.

Compared to other battery backup cases, the ibattz Mojo Armor Removable Battery Case costs about the same while giving the user a lot more functionality.

At only $89.99 direct from ibattz, the case offers great value. Most battery backup cases I’ve tested run from $70-$100. Rugged cases can cost almost that much. This case gives me both in one case for the price of just one of the competitors.

If you plan to keep your iPhone for a while, need both a backup battery and some rugged protection for the iPhone 4 or 4S, then the ibattz Mojo Armor Removable Battery Case for iPhone 4 and 4S is a great option at a good price.

If you want to upgrade to the iPhone 5 this fall, then wait and get a newer model which will support the new connector.