The new iCade 8 Bitty Bluetooth controller from Ion is now available for iPhone, iPad and Android gamers who want a retro gaming experience on their modern devices.

The iCade 8 Bitty is a small rectangular controller that looks like an NES controller with its hard lines that may or may not be comfortable to hold for long hours. Unlike the NES controller, however, the 8 Bitty has four face buttons, two shoulder buttons, and a D-Pad to make it more like an SNES controller.

On Android the 8 Bitty support MAME4droid for arcade ROMs. Jailbroken iOS users can also use the controller with iMAME4all.

The 8 Bitty is a smaller version of the iCade cabinet, and most games that support the cabinet should support the 8 Bitty.

Because the 8 Bitty is a standalone controller users need to have a stand for their smartphone or tablet while using it. Ion also make a similar Bluetooth controller called the iCade Mobile which fits around an iPhone for easier gaming on the go. The iCade Mobile turns the iPhone into more of a traditional portable gaming system. 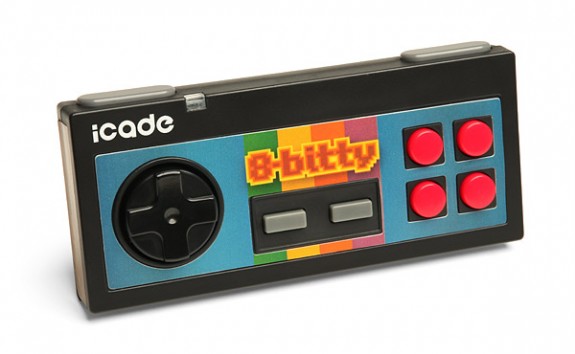 The iCade 8 Bitty is available from ThinkGeek now for $29.99. It runs on two AAA batteries, though ThinkGeek doesn’t say how long the batteries will last in the device.