iCloud won’t include one of the most useful MobileMe features – OS X Settings synchronization. Things like the layout of your OS X Dock icons, keychain passwords and user names and all of your email accounts will not be synced between devices via the new iCloud service.

When I first made the leap to the Mac world almost a year ago, the free MobileMe trial account that comes with a new Mac underwhelmed me. I shared files using DropBox and synced email, calendars and contacts using Gmail. However, after the 60 day trial was finished the one thing that I really liked and missed was the ability to backup settings. At the time I only had a MacBook Air, but as part of some testing I reformatted it and reinstalled the OS. As soon as I configured my trial MobileMe account those settings just showed up. This was one of the things I really liked about the OS X environment.

When I bought a second Mac and again had a 60 day trial, I went ahead and dropped the money for a one year MobileMe account the settings synchronization feature alone. The set-it-and-leave-it kind of person will not find this valuable, but I’m alway fiddling with these kinds of things and like to have changes in settings made to one Mac just show up on my other Mac. 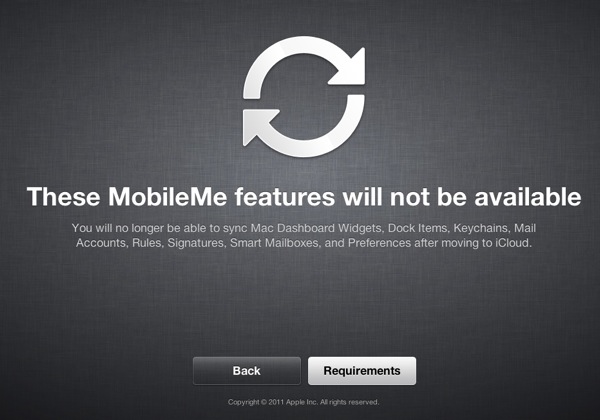 With iCloud being released in the next few months, we will have the ability to sync and backup things like photos, music, videos and files. You only get 5GB for free and will have to pay extra for more space. However, most of these features are available from other services at a similar or even cheaper rate. You will have to search for a new way to sync settings for your Dock icons, system settings and Mail or iCal mail accounts, all of which MobileMe now syncs.

If you have OS X Lion and the beta version of iOS 5 you can make the switch to iCloud now by going to the transition page at the MobileMe site. You will lose this useful feature and for that reason alone I’m disappointed with iCloud already.