Just a day ahead of the iOS 5 release date that will bring with it Apple’s new iCloud service one of the glaring omissions in the new Internet-based backup, storage and sync service is video purchased through iTunes. Users will be able to download all of their apps and music purchased through iTunes, but video won’t come with it.

Apple wants to make deals with Hollywood to allow movie and TV show buyers to download their content again, but one road block might be a new cloud-based storage locker service called Ultraviolet, which three major Hollywood studios will put together in coming months. Only Disney, which has close ties to Apple through the late Steve Jobs presence on their board as the head of Disney’s Pixar, won’t take part in Ultraviolet. Sony, Warner Brothers and Universal joined together with the new Ultraviolet to give DVD buyers a cloud-based storage locker for those supported movies. When you buy a DVD you will also get the rights to an Ultraviolet version that you can stream through your computer. Soon, they hope to have tablet apps, TV and DVD or Blu-ray versions, and incorporation into set-top boxes like the Roku player. 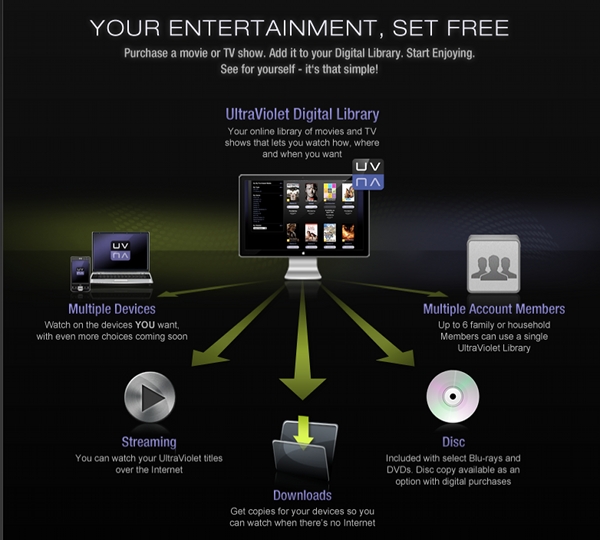 Apple couldn’t get the movie companies on board with iCloud at launch. They hope to add it later. I’m betting that Ultraviolet kept the movie studio execs from agreeing to terms with Apple. If true, this proves one more time that the movie execs don’t get us. Most typical consumers want video streaming, but we don’t want another layer of complexity. If Ultraviolet doesn’t piggyback onto already existing devices that can easily be upgraded, the service will go nowhere and offer little incentive for buyers. Let me stream to the devices I already own and it might work. Force me to buy another box or add another service and Ultraviolet will go the way of services like Vudu and Cinema Now – nowhere! Neither of those services can get any traction for the above reasons.

The three places I want to see movies streamed include iTunes and its supported devices since I’m an Apple customer, Amazon’s Instant Video service since I’m a Prime customer, and Netflix. I have a Roku box so I’m willing to add a channel to that to get a service like Ultraviolet. But I don’t want it in my TV or DVD menu and I definitely don’t want another box or a service that requires me to hook a computer up to my TV.

Do you want another movie streaming solution? Where do you want Hollywood to put their movies so you can watch?