The best booth at IDF 2010 that I saw was staffed by a whole bunch of 4th graders and Intel’s emerging markets platform group. While the Intel staffers were certainly knowledgeable, the kids stole the show. 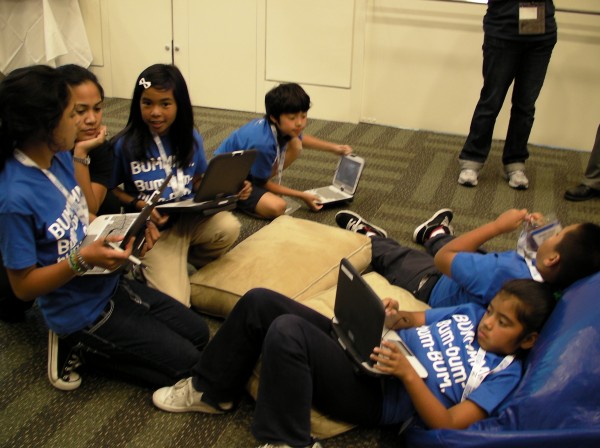 As I approached the Classmate PC display at IDF, a little girl ran up to me and asked if she could interview me. She asked me several questions about what I do for work and what I enjoy most. I told her that I love meeting people from all over the world and discussing technology, travelling and taking pictures. I asked her what she does for work and she told me that her job is to learn. Her favorite subject is language arts. She recorded the whole thing on tablet’s web cam. I shot a quick video of her and her Classmate PC and she really knew her way around it. She showed me how she could edit photos, draw and navigate the entire system.

She said that she views the Classmate PCs as something to have fun with, rather than learning. And that’s the beauty of the Classmate PC and the curriculum. It makes learning so fun that the kids think they’re playing. They’re learning how to edit photos, splice videos, draw, program robots and collaborate. They’re learning how to use technology as a tool in their daily lives, for a lot more than just movies and video games. But to them it’s all just a bunch of fun.

I learned more about the Classmate PC program from this one interaction than the dozen or so meetings, conference calls and Intel events where the Classmate PC was the center of attention. Other divisions of Intel and PC vendors might want to borrow the idea of bringing in real-world users to trade shows instead of company wonks.


(Unfortunately, I accidentally switched off my microphone, but you can still get an idea of what he’s doing with the above clip)

A boy saw me chatting it up with Paloma and came over to show off what he’s learning to do. He’s learned how to use sensors and program Lego robots with his Classmate PC. One thing that I like about convertible computers is the flexibility. He’s taken to using the stylus to work on the screen. He doesn’t know why he uses it while most of his classmates use the touchpad, but it’s pretty obvious that it’s just more natural for him. There was another boy that was using his Classmate PC in tablet mode the entire hour I was there. 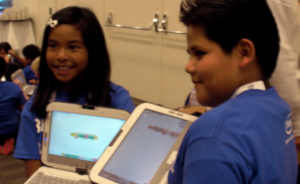 After chatting with the kids for a while, the adults on hand explained that Intel adopted a 4th grade classroom in Campbell, not far from its Santa Clara headquarters. Instead of just dropping dozens of netbooks off at the beginning of the school year, Intel’s taking a much more comprehensive approach.

The teacher spent the summer learning how to incorporate convertible Classmate PCs into her lesson plans. Each of her thirty one students were issued convertible ClassMate PCs just three weeks ago. They’re already experts and are very enthusiastic about learning.

Kapil Wadheram, director of Intel’s Emerging Markets Platforms Group (EMPG), came by to show me the latest clamshell Classmate PC. It doesn’t have all the bells and whistles that the convertible model does, but it’s more affordable. Intel is working with McGraw Hill on a version of the Classmate PC that ships with electronic textbooks and learning material. The digital textbooks have sections and quizes built in that adjust to each student’s ability, giving top performing students more complex information, while helping those who are struggling the material they need to catch up. This makes it so teachers don’t have to teach to the middle, boring the quickest learners and leaving some behind.

Why doesn’t every classroom have a cart full of Classmate PCs?

The idea of getting computers into the classroom is nothing new. Back in elementary school we were lucky enough to have a well-stocked computer lab full of Apple II’s, which we got to go visit once in a while. Eventually, some classrooms received a single Apple computer that we could take turns on, which was a special treat. Back in the mid-1980’s we were told that ‘someday’ every student would have a computer at their desk. Students would be able to take tests on them instead of having to fill in dots on Scantrons and they’d even be able to read books on them.

Not a whole lot changed as I made my way through middle school and high school. Computers were donated to my schools, but they weren’t tightly integrated into our studies. The few of us who were really interested in computers would seek out computer learning opportunities. I spent countless lunch hours in my high school’s music room learning MIDI and Photoshop 2.0, but most of my classmates’ learning experiences were all analog.

Having technology in schools simply isn’t enough. Parents, churches, companies and philanthropists can throw all the technology they want at schools, but computers and gadgets don’t do a whole lot to enhance the learning experience unless educators and administrators learn how to use the stuff. While my high school had a handful of donated Macs, there wasn’t a single adult on campus that could properly operate one, much less incorporate them into our lesson plans. In fact, I got in big trouble with our trigonometry teacher, who doubled as the computer lab admin, because I simply changed the welcome message to something snarky and the desktop background on the newest Mac. He simply would not tolerate me ‘hacking’ expensive school computers and causing irreversible damage.

Obviously kids and educators alike are much more tech savvy these days, but many classrooms are still stuck back in the 1980s. Kids might use computers at home or on occasion in the classroom, but technology is still not woven into the fabric of lesson plans. While school districts may be willing to spend thousands of dollars per pupil on textbooks, technology is the red-headed stepchild of master budgets. Want to buy each kid in your school a netbook instead of a pile of 10-pound textbooks that’ll be outdated before kids even open them? Good luck with that…

I’ve heard a lot about the Classmate PC program before, but I’d never actually seen the fruits of all the talk for myself. Portugal’s rolling out half a million Classmate PCs to students, but we can’t seem to get our act together here in the U.S. Instead, we keep spending money on heavy, expensive books and teaching our nation’s children the same way their parents and grandparents were. It’s time for some serious investment in re-training teachers and shifting budgets around.