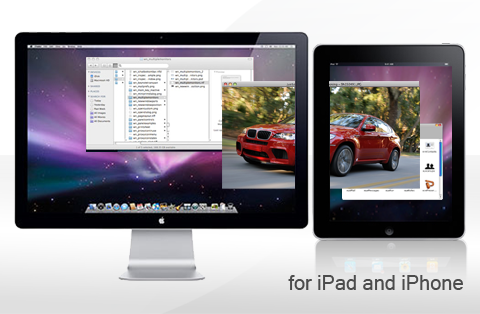 Think you don’t need an iPad because you already have a Macbook? Well, iDisplay from Shape Services may change your mind: it extends your display over to an iPad, giving your display an extra 768×1024 pixels with multi-touch screen control.

Compared to other side displays, the iDisplay solution has several advantages. While the price of an iPad is much higher than most side displays (a touchscreen Mimo runs $229 at ThinkGeek), it is multi-touch, larger (9.7″ vs. 7″ for the Mimo), and can run on its own power supply. And of course, you can also use it for other things. While I wouldn’t buy an iPad just to use as an extended display, the option to do so is a big value added proposition. The app itself is currently $4.99.

Currently the software is limited to Mac, but a Windows solution is in the works. It is compatible with iPhone and iPod touch, but judging from the comments in the iTunes app listing, that usage sounds problematic due to the resolution differences, though I don’t see the point of using such a small device as a display extension anyway. I find it better to use an iPhone independently to play music, check email, etc. But extending to an iPad looks like it would be an appealing solution to power users on the go.