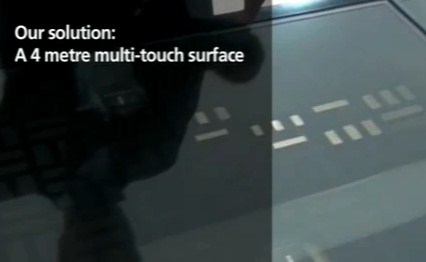 Video of the table is up on YouTube. (Unfortunately, they appear to have chosen not to allow embedding.) Clearly going for a high-tech look, which I think they pulled off. Extra impressive is that they programmed the interface from scratch, rather than rely on some third-party tool. Excellent work, guys. Press release below.

The Lincoln touch table was produced for the North American Auto Show 2010 season to highlight common technologies across all Lincoln cars, putting the user in control of their learning and discovery in a manner that matches the Lincoln brand promise. The 4-metre long multi-touch enabled table was designed to embody the technical innovation of the Lincoln brand.

Dubbed the “Lincoln Technology Table” during the show, the multi-touch environment used Microsoft Sync technology to demonstrate how Lincoln vehicles support and interact with drivers and passengers.  The touch table employs the latest surface-interaction technology with flexible, bespoke software.

Imagination’s inventive technical solution was designed to reflect the essence of the Lincoln brand and inspire visitors through an intuitive, interactive experience.

The Lincoln touch table was designed using the industry’s first multi-touch LCD array system, created by Imagination and Finnish technology provider, MultiTouch Ltd.  Without any reliance on Flash, the visually-engaging programme is written in C++ and OpenGL and was developed using Agile project methodology.

The table displays content based around four key aspects of Lincoln:

“The Lincoln touch table is the first of its kind,” said Damian Ferrar, Head of Digital at Imagination.  “Many organisations communicate to customers on their own terms rather than allowing the consumer to be in control.  Consumers don’t want to be marketed at – but want to participate, explore and understand. The Lincoln touch table is an intriguing and interesting way to explain the brand and products to a modern audience.”

For a video overview of the Lincoln touch table visit https://www.youtube.com/user/ImaginationDigital#p/a/u/0/5qLJyhThnio