If Tech Companies Were Countries: Check Out a Map of the Internet

In the Age of the Internet, it seems like the boundaries and borders we associate with sovereign nations, geographical features and political affiliations don’t mean what they used to. The Internet has certainly been a factor in breaking down some of those barriers. But what if tech companies were countries? This map, featured in a Slate.com article, breaks down our planet in an entirely different view placing the Google’s, Microsoft’s Apple’s, and other smaller companies on a map. 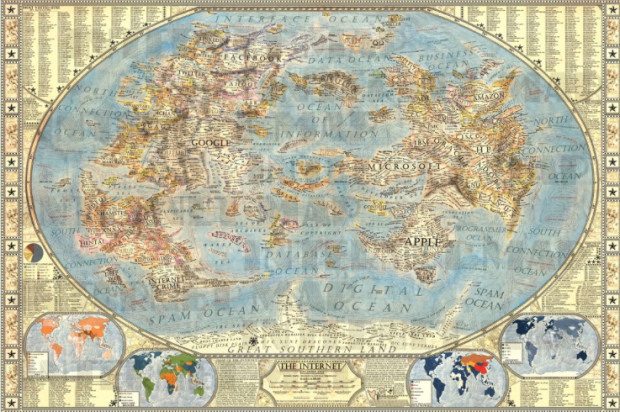 Created by Slovakian artist Martin Vargic and posted on Deviant Art, the interactive map is quite something to behold. Vargic calls his map, The Internet 1.0, but that’s because this is his first version, not the Internet’s. Vargic, who also seems to go by the name Jay Simons has created quite a view of the world and if Internet traffic created superpowers, well a quick glance would tell you quite a bit about who is on top. Deeper scrutiny also reveals that a goodly portion of the Internet is all about porn as well. But we don’t talk about that in polite circles. There are some clever names for bodies of water and certain regions like The Land of Indexes and Developer Sea. It’s easy to get lost spending time wandering through the Internet 1.0.

It’s fun to zoom in and poke around to see smaller companies and who shares a border with whom. Given that the Internet changes much faster than countries and political alliances do, it would be fun to watch this shift and change as companies fortunes ebb and flow as well. Head over to deviantart.com to check out the full interactive version. It is quite an undertaking and well done.
Related Topics:Jay SimonsMap of the Internet 1.0Martin VargicThe Map of the Internet