When the Surface Pro tablet was announced by Microsoft, I was excited. It would be the first non-Apple tablet that could handle all my iTunes content, including my large library of movies and TV shows that I had purchased, while still allowing me to access other digital ecosystems, like movies from Amazon, stream shows from network TV websites that require the use of Adobe’s Flash Player, and also watch Google Play movies. I would also be able to also do any and all of the work I could do on my home PC while at the same time have the ultimate, portable content consumption device in a very compact and mobile form factor. However, I soon realized that my love affair for iTunes made the Surface Pro a bad choice, and this isn’t any fault of Microsoft’s but rather a problem with Apple’s iTunes software. 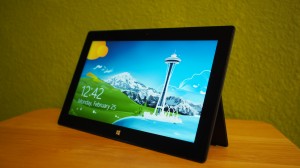 According to Apple’s iTunes webpage, the minimum PC system requirements for iTunes include a device with a 1GHz Intel or AMD processor and 512MB of RAM. I was good to go with the specs of Microsoft’s Surface Pro tablet with its dual-core Intel Core i5 CPU, Windows 8 Pro OS, and ample 4 GB RAM. When I was using the Microsoft tablet, I had updated all the drivers and installed all of Windows’ recommended updates for the system, meaning that all my drivers and software was up to date along with the iTunes 11.0.2 version that I installed for Windows.

However, when it came time to play movies and TV shows, I quickly noticed that after a few minutes, audio would go out of sync with the video. Essentially what that means is that the video would be about 2-3 seconds faster than the audio, which would look weird when characters on the screen began to talk and their voices trailed. It’s like a bad case of lip synching.

There were several suggestions from Apple and the Apple support community, and I’ve tried most–if not–all of those suggestions. One suggestion suggested that I checked the box to disable audio enhancement from my sound driver, which I did. That didn’t work. I’ve also tried downloading the video file rather than streaming the file without download through iCloud, a new feature introduced in iTunes 11.0.2, and that did not work. It didn’t matter if the video file was native or if I was streaming it on a fast broadband connection. I had even tried attaching wired external speakers, but the problem of audio sync error persisted.

In summary, Microsoft’s Surface Pro can handle iTunes and it’s fine if you’re playing audio-only files, like music. However, video files did not seem to cooperate and Microsoft’s Answer Desk at the company’s retail stores could not give me any solutions or answers–they claim that this is the first they’ve heard of the issue. I believe this is an issue with how Apple’s software interacts with the PC’s hardware and that Apple needs to do a better job at testing software and making sure it’s compatible with drivers and various hardware components.

I had hoped to use the Surface Pro’s discrete size as a media center PC while traveling to play my iTunes subscriptions to favorite TV shows like The Big Bang Theory, streaming The Good Wife from CBS.com, watching my Amazon Instant Video and Netflix streams, and also enjoy How I Met Your Mother on Google Play. I could still do all of that, but for now, my large library on iTunes is held captive until Apple and Microsoft can sort out the issues. In the interim, I can make due with Apple TV, Roku, and Google TV, though neither of them would allow Flash streaming content to CBS.com and other network websites.