iFixit already tore apart a new MacBook Air and found that the SSD can in fact be replaced. I tested an SSD upgrade on my 2010 MacBook Air and it is not that hard. It was rumored that the new models would have storage hardwired to the mainboard just like the RAM, making the flash drives impossible to replace. 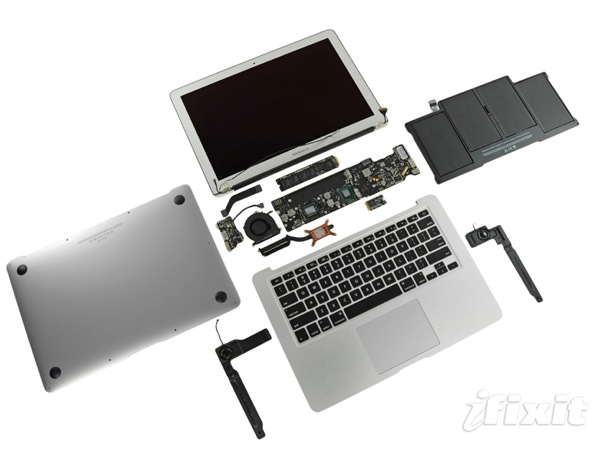 The design of the new MacBook Air resembles the 2nd gen models in many ways. The addition of a Thunderbolt port and upgraded Intel Core i5 or i7 Sandy Bridge processors means there not exact replicas. Other than that the new Air is similar.

We hoped the way memory is connected would be one difference. The memory is still hardwired to the motherboard so it still won’t be user upgradable. If you think you might need 4GB get it from the start or you will be replacing the whole computer to upgrade. The 4GB configuration adds $200 to the cost, which is really ridiculous when you consider that you can buy 4GB of RAM for about a fourth that price.

If you are interested in the guts of this new system, check out iFixit’s step-by-step pictorial explanation of how to tear down a MacBook Air. Here are some of the details they discovered: