iFixit tears down Apple's "diabolical" pentalobe screws (which they can fix for $9.95)

There’s a post on the iFixit blog railing against a five-point “pentalobe” screw that Apple has started using on their Macbook Air and is swapping into the iPhone during repair, presumably meaning it will be standard in the next iPhone. The shape is new and a “reputable” source for a matching driver is supposedly impossible to find, making this the ultimate screw job! So evil! How fortunate that iFixit has a kit to solve the problem for only $9.95! Oh, it must be kismet.

Let’s be honest about this. Of the millions of people who own an iPhone or Macbook Air, only the tiniest percentage would ever attempt to open up their device for any reason. Since they’re not upgradeable, the only time you’d need to remove these screws is for repair, which almost no one would do themselves. The vast majority would send it to Apple or an authorized repair shop. This so-called plan to screw us screws almost none of us.

So if Apple’s not trying to screw us, then why use pentalobe? Apple refers to them as “Pentalobe security screws” and certainly screws that cannot be easily removed are more secure. Watch a few episodes of “Burn Notice” and you’ll start to think about the tamper-resistance of your phone. However, a more compelling reason, I believe, is the stability offered by the five-point design. 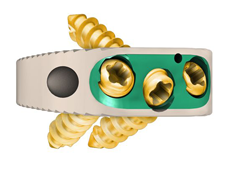 Doing some research, I found a spinal implant that also uses rounded pentalobe screws. Why they chose that design is not listed, but I assume it’s not to keep users from installing their own spinal implants. More likely, the stability of the five-point pattern (like the legs of a five-wheeled office chair) offers the precision and torque necessary to drive screws into bone with minimal risk of slipping. While driving screws into an iPhone won’t result in paralyzing someone if the driver slips, such an incident with the device could easily mar it, which they’d surely like to avoid.

None of that disproves the idea that Apple has launched a “Diabolical Plan to Screw Your iPhone,” but the pentalobe does offer legitimate advantages of tamper-resistance and precision. Personally, I’d be more inclined to believe the scary conspiracy theory if it wasn’t followed immediately by a sales pitch for the solution and did not imply that other sources for said solution are not reputable.

Via several outlets, but I’m going with Daring Fireball since Gruber seems to be the only one who gets it.

Update: CrunchGear found an appropriate screwdriver for $2.35. Hopefully they’re not one of those “unreputable” sources iFixit warned of.