Hot on the heels of Apple’s announcement that its iOS 7 would bring support for third-party gaming controllers, accessory maker iFrogz has announced that it will add iOS gaming support to the Caliber Advantage Mobile Gaming Controller for use with the iPod Touch and iPhone.

The device, which was already previewed during this year’s Consumer Electronics Show, and is scheduled to hit store shelves this fall for $59.99, will allow gamers to make use of its physical controls to supplement the controls already at the heart of all iOS games. These physical controls will include left and right bumpers as well as two thumb sticks, a directional pad and four smaller buttons for use with small actions like jumping or shooting. 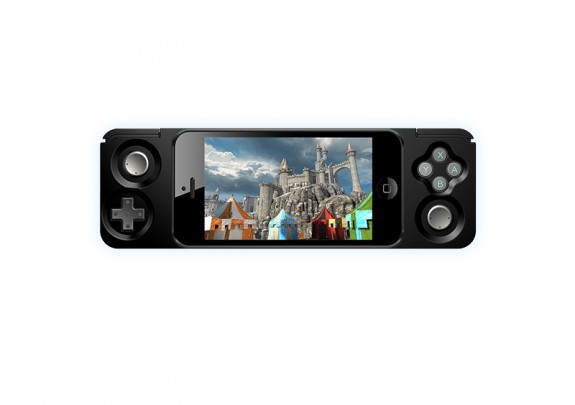 All told the controller’s configuration is nearly identical to the configuration of most home entertainment consoles that can be used for gaming, like the Xbox 360 and PlayStation 3. Instead of having to be plugged into the iPhone’s Dock Connector or Lightening Port, the controller itself will use Bluetooth to communicate with the device it’s been paired to.

That Bluetooth functionality also means that, rather than be dependent on the device’s battery, the Caliber Advantage Mobile Gaming Controller will have its own integrated rechargeable battery, eliminating the problem that many external gaming devices face: having to replace batteries.

Users will be able to place their iPhone 5 inside the controller’s holder and adjust the orientation of their device based on the game they are playing. When the user isn’t gaming, they can push the controllers in and have them slide underneath the device for a smaller profile. That would make the controller much easier to transport than some of the styles company’s like MOGA have been using on their controllers for Android users.

Ifrogz had already indicated that the controller would require the use of what it called the Caliber Engine Application, though at this time we’re unsure if that’s still the case, or if it will be dropped in favor of developers just using the built-in compatibility with iOS 7.