Rockstar Games seems to have spared no expense when developing GTA 5, the latest edition in the Grand Theft Auto franchise. A new application released for iPhone and iPad will allow users to interact with the game while away from their Xbox 360 or PlayStation 3.

The application, which is now available in the iTunes App Store for free,  allows users to stay keyed into the game’s happenings even when they are away from their console. According to the app’s description, users will be able to use specific sections of the application to change things in the game and receive info on the latest in-game news. 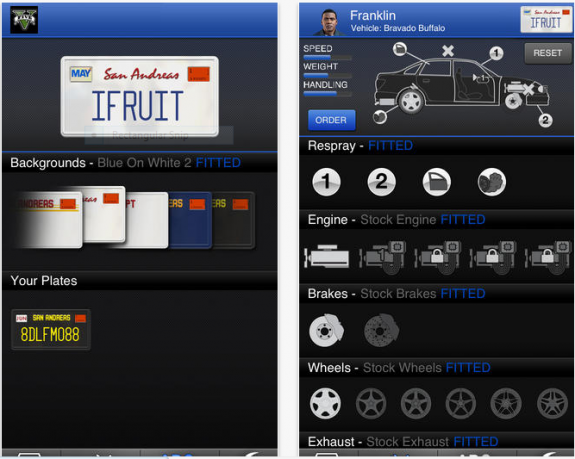 Virtual application, Chop the Dog enhances game play as well. Through the Chop the Dog application, users can take care of one of the game’s main character’s pets from their iPhone and IPad wherever they are. By, feeding, petting, walking, and training the dog, Rockstar says users will find that the dog is more helpful, performs tricks and helps them player find hidden items in Grand Theft Auto 5. By adding this capability to the iFruit application, Rockstar is hoping that users stay immersed in the game. It’s an idea that isn’t all that far from the digital pet toys that dominated holiday wish lists in the late 1990s.

The company says that it also has a digital manual for the game releasing today as well. It will include “over 100 pages” of content about the game including maps and location information, all for free.

Although the iFruit application is only available on iOS devices today, it won’t remain that way forever. Rockstar says users can expect the app along with the game’s digital manual to roll out to Google Play, and Windows Phone over time. PlayStation Mobile and PlayStation Vita will have access to a version of iFruit, however it looks like they won’t be getting the manual.

Grand Theft Auto 5 will go on sale at midnight at most GameStop locations. Users will be able to pick up standard versions of the Game at their local Best Buy, Wal-Mart and Target stores tomorrow.