The iHome iP78 LED Color Changing Tower Speaker System with Bluetooth for iHome and iPod looks like a pretty cool tower speaker dock for you iPhone. It offers multiple color LED lights that change with the beats of your music along with a dock for you iPhone or iPod.

It’s one of the coolest looking products to come from iHome in a while.

If offers an interesting set of color LEDs that respond to your music. The LEDs will switch slowly fading between the many colors or you can pick your favorite color lock the LEDs to it. The speaker’s LEDs pulse with the music, strobe and use the white light as a dimming lamp depending on the setting. 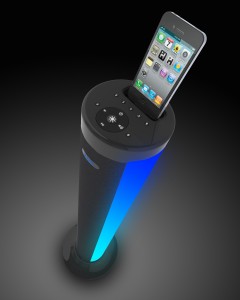 The colors included are:

The wireless Bluetooth feature connects to any Bluetooth device, including another iPhone, iPad, or iPod Touch. You could use another Bluetooth phone, like Android or Windows Phone, that will stream music wirelessly. It’s also possible to stream music from a Bluetooth enabled computer.

The speaker measures about 3 feet high and a hair over 10″ in diameter. You can dock an iPhone or iPod and charge while playing your songs or videos.

On the back you get two connections, one for a line in stereo connection and the other will send component video signals to your HDTV so you can watch movies on your set while hearing the audio on the speaker system. An included remote makes it useful for across the room control from your couch.

The speaker will work with all the iHome apps, like the free iHome Sleep app which turns your iPhone into a sleep timer stereo and wake up alarm.

I just wish it also offered AirPlay. I came to really like using AirPlay after reviewing their most recent set of iHome iW2 AirPlay speakers for my office.

The iP76 Tower Speakers from iHome will ship this July for $199.99. Get more information at iHomeaudio.com.